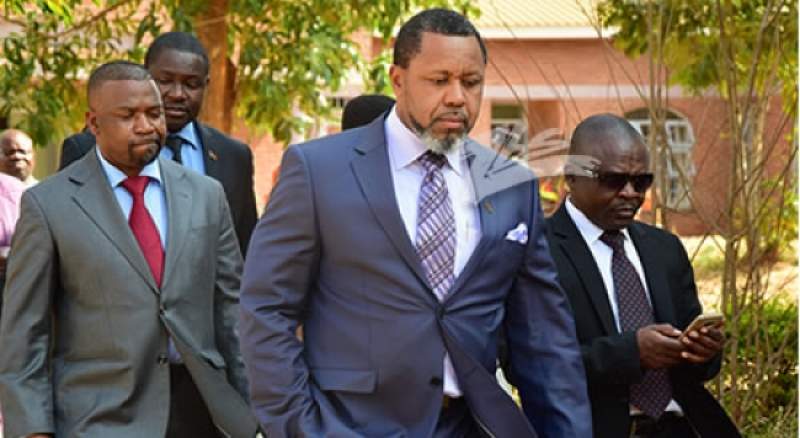 Counsel Dr. Chikosa Silungwe started re-examining Chilima in the afternoon but suffered an objection from Attorney General Kalekeni Kaphale representing MEC and Frank Mbeta representing Mutharika after about ten minutes into the re-examination.

The objection was raised after Counsel Silungwe produced a document which his counterparts from the respondents’ side alleged that it was not disclosed to them.

Kaphale raised the objection on grounds that his cross examination with Chilima on the percentages of polling centers affected by irregularities on the polling centres did not cover the sworn statements of witnesses, Miriam Gwalidi and Darlington Ndasauka.

Kaphale said the document that was circulated by Counsel Silungwe was covering statements from both witnesses.

“In the cross examination, percentages of irregularities did not cover the total valid votes; it covered polling centers.

“The document makes reference to legal provisions which were allegedly breached in the course of direct irregularities. I object that legal provisions are not for witnesses but counsels and court,” argued Kaphale.

His counterpart, Counsel Mbeta, added by objecting the document in its entirety, principally on grounds that the document was just thrown in and introduced matters that were not arisen in the cross examination.

“Re-examination should dwell on matters on cross examination,” he said.

Counsel Silungwe, however, defended himself by saying that the document was just for guidance and that he wanted to bring another side of tackled matters from it.

After hearing arguments from both sides, court adjourned for ten minutes to make its determination on the matter but the break ended up being extended to about forty minutes.

Judge Healey Potani who is leading a panel of judges hearing the case read out the determination that “records show that in cross examination, the Attorney General indicated that the issue pertaining percentages of affected polling centers would be tackled when Gwalidi and Ndasauka will take the stand.

“Re-examination should touch on percentages that affected polling centers and should not affect percentages in the sworn statements of Gwalidi and Ndasauka.

“Re-examination should be restricted to percentage of polling centers and we uphold that these are matters of law and not for witness but counsels and court.”

Counsel Silungwe, however, said in an interview that “the nature of the case is highly political and highly polarized so the interjections are to be expected. It’s nothing really to do with the spine of the case.”

The Attorney General, on the other hand, said that “yesterday [Monday] I gave a warning; I did not seek any ruling on that but I warned the parties, the petitioners mostly, that their interjections will come to haunt them when they want to re-examine; and you have seen what happened today.

“They were preventing the witness from explaining during cross examination and now they are failing to put across questions that will allow the witness to explain matters.”