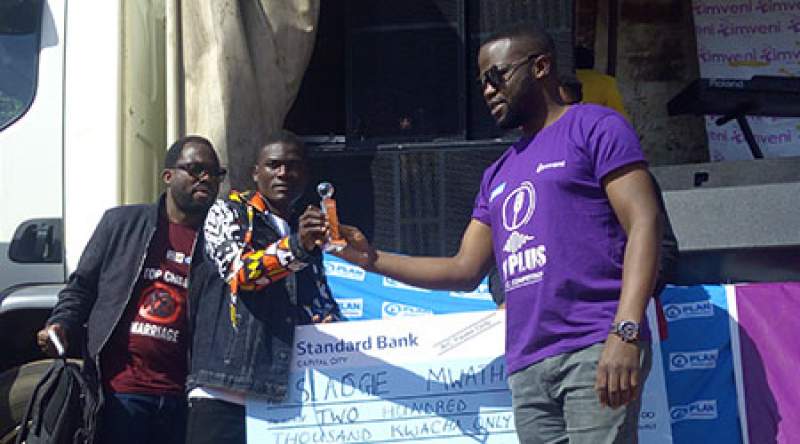 Sladge receiving his award from Msungama - pic by Hastings Jimani

600 plus youths across the country participated in the competition that run from 20 November, 2020.

Sladge reached the finals together with Felister Muloma and Hanna Goodson.

Speaking to Zodiak Online after the grand finale of the competition held on Sunday in Mulanje, Timveni Executive Director Herbert Chidaya said the competition was organized to give a platform to the youths to voice challenges affecting their lives besides promoting their singing talent.

“Youths know challenges affecting their lives and how to speak them out, so having identified music as a tool to voice out their concerns; duty bearers including parents and gatekeepers should come in and support them,” said Chidaya.

Minister of Youth and Sports Ulemu Msungama who graced the occasion called for collaboration in ending norms that negatively affect the future of children especially the girls.

“We have a 2063 agenda which is to benefit the current youthful generation and if we cannot educate them, the blueprint will be meaningless,” said Msungama.

He said singing is his passion and winning the competition is a motivation to his career.

“What I have learnt throughout the competition is to trust in God and have self-esteem and am glad that eventually I have emerged the overall winner,” said Sladge.

Hanna was on second position and she received K150, 000 while Felister received K100, 000 for scooping position three.

The 18 plus media project which Timveni is been implementing is funded by Plan International Malawi.