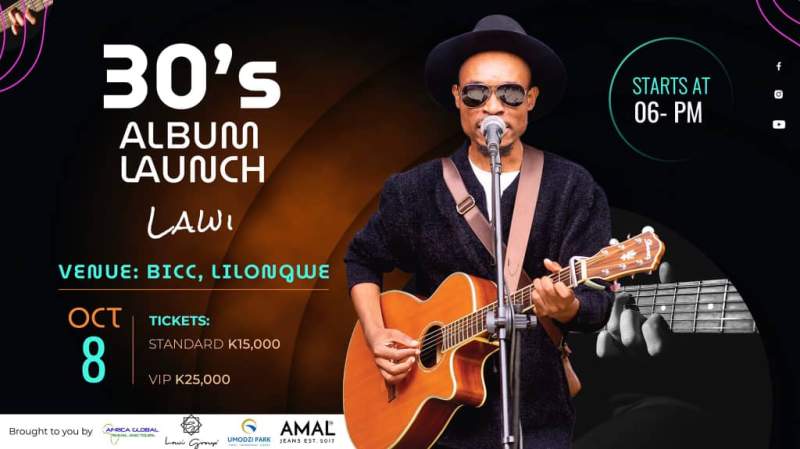 Zodiak Broadcasting Station-ZBS has on Monday 26th September signed a partnership with Lawi, a Malawian afro-jazz maestro for promotion of his Thirties Album launch, on 8th October in Lilongwe.

This is a second feat for Zodiak in less than a week, having launched its traditional dance competition, Zondaco on Friday 23rd September.

ZBS director of Broadcasting Joab Frank Chakhaza has said such partnerships are crucial for diversity in the entertainment industry, therefore working with the artist is a great move and the beginning of great things to come.

“It’s like two giants coming together, it’s going to be a cross-fertilization of ideas and talent. We’ve got our own niche that we reach out to and a special set of talents, and Lawi on the other extreme is a talented musician. We are a diverse media institution that deals in different things, and music is and entertainment is one of them,” Chakhaza says.

He adds, “Music constitutes a greater portion of our work, and it is beneficial to Malawians to come up with such programs. This is the reason such partnerships are crucial for diversity in the broadcasting industry.

On his part, Lawi, real name Francis Phiri says his name is a brand that cannot be promoted single-handedly, but can sell if well-captured and documented by Zodiak, an equally big brand in the entertainment circles.

He has indicated he is optimistic of visibility and to reach new horizons, adding that can only be possible with Zodiak as heavyweights in the broadcasting and entertainment industry.

“I really believe that no man is an island and as a business, you can only be successful if you align yourself with other successful brands, so Zodiak is a very influential media institution and as for me as a brand, I believe that it’s the best decision that I have made,” says Lawi.

The partnership will see Zodiak take up all broadcasting promotional role of the Lawi brand until the launch.