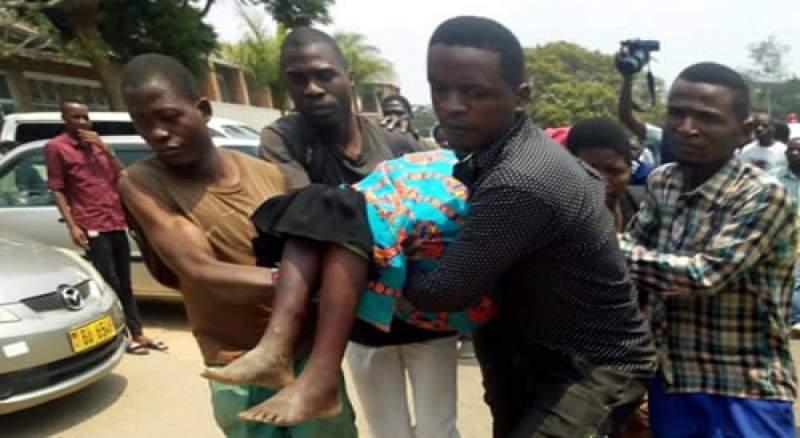 Various quarters of the country have condemned action taken by Malawi police during a fight between anti-Jane Ansah protesters and purported supporters of Democratic Progressive Party.

The Public Affairs Committee (PAC) says in a statement that the police acts demonstrated during the demonstrations which culminated into a fight are a departure from the tenets of democratic dispensation.

“What is more shocking is that these acts of violence seem to have taken place in full view of the police. PAC strongly condemns the negligent attitude of the police in condoning acts of violence in their full view, let alone for throwing teargas around Queen Elizabeth Central Hospital (QUECH), a place that should have been spared in such circumstances,” reads the stamen in part, signed by PAC Chairperson Rev. Dr. Felix Chingota and Publicity Secretary, Fr. Peter Mulomole.

The religious affiliated body added that “we note that an innocent life has been lost. We cannot afford to lose even a single person created in God’s image as a result of negligent acts from the police,” he said.

Human Rights Defenders Coalition (HRDC) organized the protests in Blantyre to deliver their petition to electoral delegates from Southern Africa who are meeting in the commercial city.

They are against leadership of Malawi Electoral Commission (MEC) and want the Commission’s chairperson, Justice Dr. Jane Ansah and the entire Commission to step down or fires on allegation that they messed up the May 21 elections.

During their marching on Masauko Chipembere Highway, the demonstrators bumped into people clad in DPP clothes who were escorting agriculture minister to open an agriculture fair and the two sides engage into a fierce fight as they pelted stones on each other.

HRDC executive member, Billy Mayaya, was attacked and was left with a cut on the head. He was rushed to hospital for treatment.

Police fired teargas in the premises of QUECH to disperse protesters who sought refuge there and an expectant woman at the Hospital reportedly collapsed due to the teargas.

The Networks’ Executive Director, George Jobe, says incidences such as yesterday’s scene in Blantyre where police fired teargas to disperse protesters who sought refuge at Queen Elizabeth Central Hospital should not entertained.

"Invading and attacking health facilities during protests must never happen considering that the protesters may require treatment from the same facilities in the course of injuries and for the safety of patients already accessing services as their lives are put at risk. Malawi police should find better alternative ways of handling situations close to or in healthy facilities as firing teargas into hospitals is a risk to patients," he said.

Meanwhile, Malawi Congress Party says is not happy with police action, saying the Party will not confirm the name of Duncan Mwapasa to be the next Inspector General of Police.