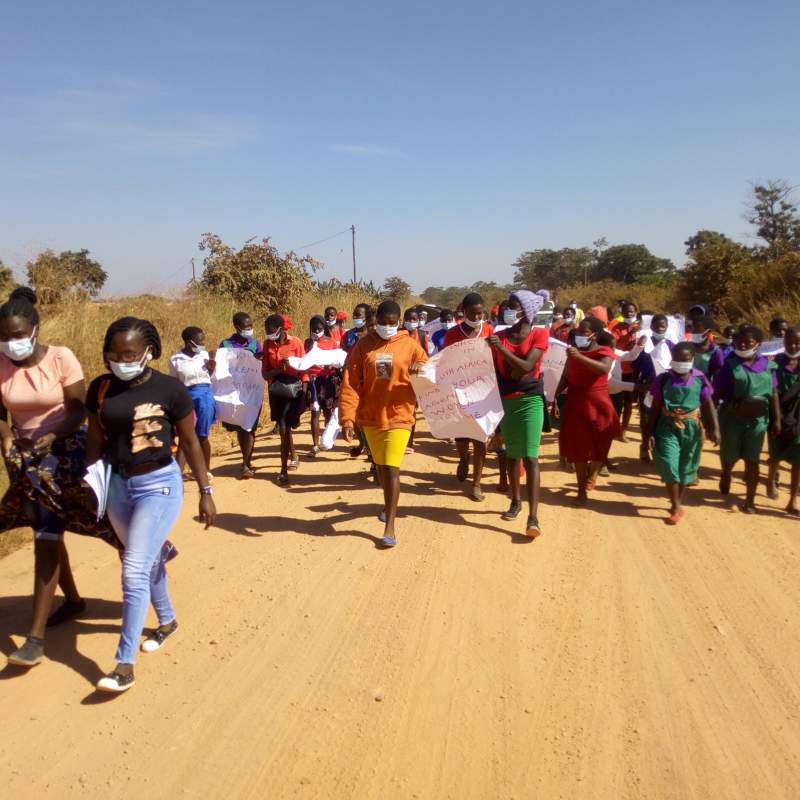 Mentors and Mentees for Action Aid Malawi under its 'Toto Nkhanza' Spotlight initiative project have petitioned Inkosi Mzukuzuku in Mzimba district for failure to enforce bylaws meant to curb gender based violence among girls and young women in his area.

Among other issues, raised in the petition presented to the Ngoni chief, the mentors say hundreds of learners have dropped out of school in Ephangweni and Mabiri Educational Zones and that the area has seen an upsurge of pregnancies of underage girls.

One of the mentors who presented the petition, Rachel Mithi said such statistics have compelled them to seek an audience with Inkosi Mzukuzuku to ensure that the bylaws formulated to curb gender based violence among girls and young women at Area Development Committee level are working.

"We are concerned that despite the bylaws we still see an increase in gender based violence. Just imagine, 450 learners dropped out of school in 2020 in two educational zones and more than 350 under aged girls got pregnant and presented themselves to either Embangweni mission hospital or Mabiri health center from 2020 to January 2021 so we think the bylaws are not being enforced", said Mithi.

Mithi added that they want things to change and that all perpetrators of gender based violence especially among girls and young women are being subjected to punishments stipulated in the bylaws.

In his response, Inkosi Mzukuzuku promised to work together with his subordinates to ensure that all perpetrators of GBV are dealt with using the bylaws.

"You know it's very difficult to change the people’s mindset or behavior in short period of time. But now together with the group village headmen and village headmen we will ensure that those perpetrating gender based violence are being given punishments under the bylaws", said Inkosi Mzukuzuku.

The Ngoni chief said the initiative by the mentors and Mentees is welcome as an awareness strategy to compel the community to guard against perpetration of gender based violence.

Project officer for Action Aid  Malawi's 'Toto Nkhanza' project under the Spotlight Initiative in Mzimba  Takondwa Moyo said an increase in gender based violence cases reported through the petition can be viewed in a positive way as it shows that many people are now coming forward to report the malpractices.

“Although, we know that such cases are on the increase but as Action Aid we see this as being a success as it only shows that with the coming in of the mentors many people are now exposing issues to do with gender based violence. Currently we are implementing this project in the areas of Inkosi Mzukuzuku, Mmbelwa, Mpherembe, Chindi and Mthwalo where girls and young women are facing similar challenges”, said Moyo.

Moyo said the project has created mentors who meet girls and young women in places designated as safe spaces where they discuss issues pertaining to gender based violence.

Action Aid Malaŵi, is one of the organizations in Mzimba district implementing the Spotlight Initiative project which is aimed at eradicating all forms of gender based violence which retard development especially among girls and young women in Mzimba and Ntchisi being funded by EU through UNFPA