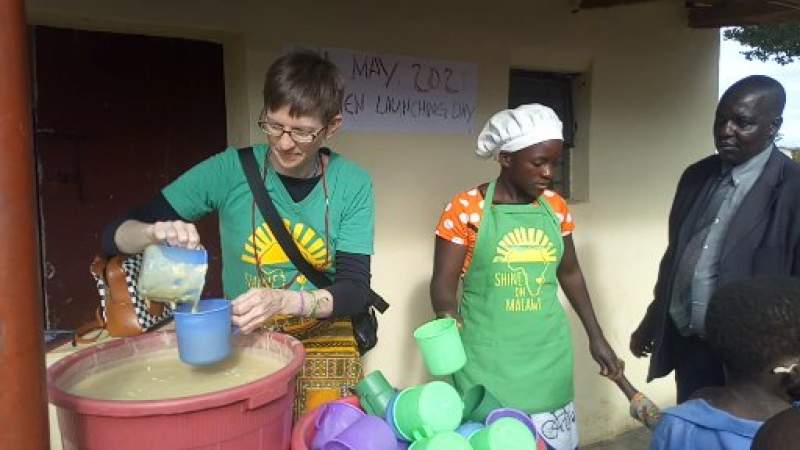 Sarah Lindmaak helping out in giving porridge to learners

A local non governmental organization Shine on Malawi has launched a school feeding program in Mzalangwe educational zone in Mzimba to ensure an improved nutritional status among learners.

Shine on Malawi, Executive Director, Stalin Mwandira said this follows reports of learners dropping out of school in the area mainly, as they were attending classes on empty stomachs.
The school feeding program has been launched with the support of a sister organization Shine on Malawi based in the United States of America
"We observed that when children come to school on an empty stomach there performance in class is not all that good they don't concentrate on learning hence we saw it fit to launch this school feeding program so that our learners concentrate when in class and that they continue attending school without dropping out", said Mwandira.
Through the project which is being funded by shine on Malawi US, they have managed to construct kitchens in some schools around Mzalangwe educational zone and are also supporting students in secondary schools.
Shine on Malawi has also facilitated the establishment of school orchards with an aim of complimenting the nutritional status of children.
" You know fruits are very important as they form part of the 6 food groups so as shine on Malaŵi we have also endeavoured to facilitate the establishment of  orchards where schools are being encouraged to grow fruits like mangoes, guavas and pawpaws among others",said Mwandira.
Primary Education Advisor for Mzalangwe educational zone Gertrude Gama has recommended Shine On Malawi for the gesture saying this will not only improve school enrollments but also enable learners to have full concentration in class.
"In the past, we were seeing a lot of school dropouts in this zone a thing which we attributed to learners coming to school on an empty stomach but now with the coming in of shine on Malaŵi things have changed a lot of children are coming to school and remaining in school so am very grateful to what the organization is doing to improve education in Mzalangwe zone.
One of Shine on Malawi USA citizens Sarah Lindmaak said they remain committed to helping children in the country attain their potential through various interventions in the education sector.
" We will continue supporting Malawian children so that they are able to attain an education and become responsible citizens in the future so we are very excited to be in Malawi", added Lindmaak
Published in: News In Northern Region
Read 849 times
Tweet
Rate this item
(0 votes)