UN Impressed With Interventions To End GBV In Malawi 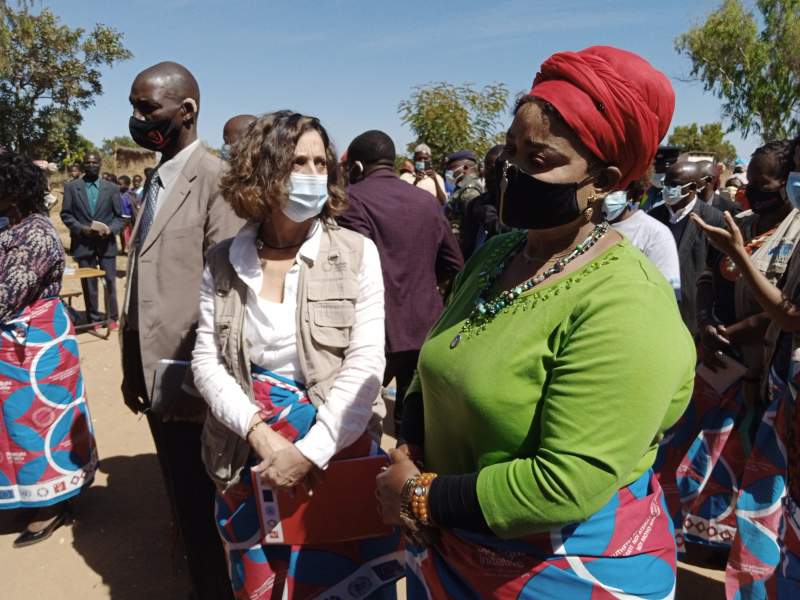 The UN Resident Coordinator says she is impressed with work being done by non-state actors under the spotlight initiative to rid the country of gender-based violence which has a negative bearing on development.

Maria Jose Torres, made the remarks in Mzimba on Tuesday during a visit together with the minister of gender, community development, and social welfare and the speaker of Parliament to appreciate interventions being mounted by non-state actors who are being supported by the spotlight initiative with funding from EU.
"So for United Nations, this is a very important program spotlight it's under the leadership of the ministry of gender and ministry of local government and on the UN side we are a joint program of four agencies UN Women, UNICEF, UNFPA and UNDP and what I am seeing today is that the work with the community is bringing intent to fighting gender-based violence", said Torres.
She said they will continue working with communities by building their capacities through the establishment of structures aimed at eradicating gender-based violence.
Torres also noted an improvement in withdrawing girls from marriage and reinstating them back into school and the prosecution of criminal cases of gender-based violence.
"I think the spotlight initiative has helped to create the space so the communities can start making the difference in ending violence against women and girls which is going to be fundamental for the development of Malaŵi", said Torres.
Minister of gender community development and social welfare Patricia Kaliati deplored the tendency of some parents who hide information in instances where their girl children are being defiled right in their families.
"Its really very pathetic seeing that our children are being defiled by their own fathers and they take it as being normal and the parents are just watching especially the mother and we have told the police to arrest both parents because we have the act which is empowering them to act", said Kaliati.
Kaliati also urged the UN to consider channeling assistants into the construction of school infrastructure to provide a conducive environment, especially for girl learners.
"As we are talking about the girl education we want to have good infrastructure at schools in the country, we want schools that have desks so that we empower the girl child", said Kaliati.
She noted that once a lot of girls are educated the numbers of female parliamentarians would increase hence women can have the necessary capacity to push for policies that champion their interests.
Kaliati emphasized that once traditional leaders and parents have taken up the cause to end GBV, monies being pumped in by partners would be used for other development issues like construction of school infrastructure.
In his remarks Inkosi Ya Makosi Mmbelwa the fifth commended the spotlight initiative for strides made in ending gender based violence among women and girls hence he called on tradition leaders to be in the forefront of the fight against the vice.
The Ngoni paramount chief however took a swipe at the police for releasing on bail people suspected of defilement saying this is demotivating to most communities who have the urge to fight gender based violence.
" Sometimes we see a defilement suspect who was arrested after being exposed by the community being released by the police and that person after two or three days is back in the community so this also is an issue affecting efforts aimed at ending GBV",Said the Ngoni Chief.
Among other high ranking officials on the tour to appreciate spotlight initiative interventions were the speaker of the national assembly Catherine Gotani Hara and EU officials.
"The Spotlight initiative is important in the eradication of gender based violence among women and girls hence we want it replicated in almost all districts in the country", said Hara.
The spotlight initiative is being implemented by various organizations in six districts in the country through four UN agencies - UN Women, UNICEF, UNFPA and UNDP with financial support from EU.
Published in: News In Northern Region
Read 1224 times
Tweet
Rate this item
(0 votes)