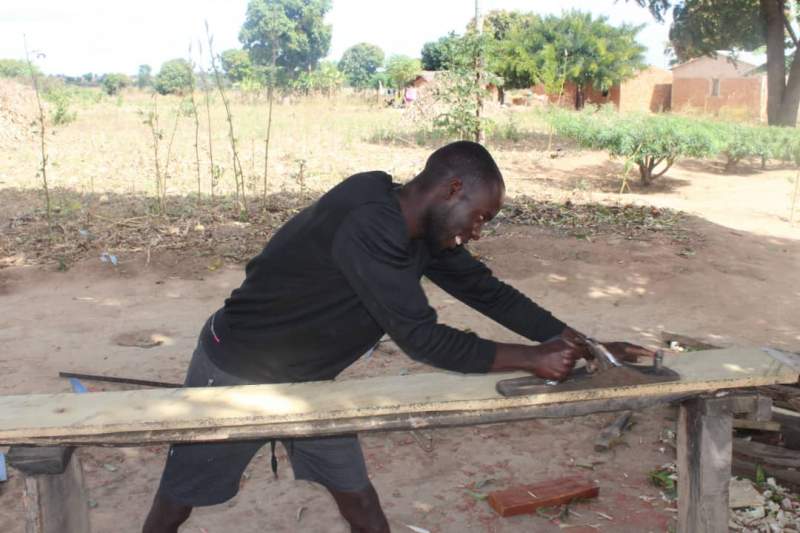 Ngwira at his carpentry shop

Efforts to look for jobs proved futile for Ngwira who had harboured ambitions to become a soldier under the Malawi Defence Force.

In his desperation, Ngwira started volunteering at Edingeni Primary School in 2014.

"I had always nursed ambitions to become a soldier but after I finished school things changed, becoming a soldier seemed like a far-fetched dream, so I just volunteered to teach at Edingeni Primary school", says Ngwira.

Ngwira says although he was volunteering at Edingeni Primary School life was still tough for him and his family.

Food was not always available as yields from farming were not enough because the family could not afford to buy inputs like fertilizer due to poverty.

However. life has now changed for the better for Ngwira and his family. Food is no longer a problem as he can now manage to buy farm inputs.

He has built a house for his parents, he is building another for himself, he has bought a bike to ease mobility challenges, and is supporting the education of his siblings who are still at school.

All this has come about through Word Alive Commission for Relief and Development - WACRAD who introduced him to the world of carpentry.

"Am now independent, I can make my own money through carpentry thanks to the training we did under TEVET with sponsorship from WACRAD", says Ngwira

Ngwira is now able to make high-quality products like doors, tables, chairs among others while raking in a lot of money.

"In a good month I make more than 100 thousand kwacha and now am thinking of expanding my business so that I employ other people", says Ngwira.

While Ngwira is now making ends meet through carpentry and joinery, 27-year-old, Mapopa Nyirenda of Emterera village in the area of Inkosi Mmbelwa is gaining ground as a bricklayer.

Nyirenda says since being trained as a bricklayer by TEVET in 2015 his world has changed for the better.

" After dropping out of school in form one I felt my future was doomed little did I know that I would be making my own money, am now able to support my wife, my two children, my parents in fact now the whole family depends on me", says Nyirenda.

Nyirenda says he can now make more money as some of the houses he builds costs over 150 thousand kwacha in labour charges.

"I have now bought some cattle, pigs, and goats I can also employ others to help me in my work", says Nyirenda.

Nyirenda says now he has his eyes on venturing into big building contracts which will mean making more money.

He says he has no plans of trekking to South Africa as many youths are doing because he is making money through bricklaying.

Nyirenda appealed to WACRAD to extend vocational skills training to other youths who are idling in villages despite finishing their education.

District labor officer for Mzimba south Russell Mhoni believes involving youths in vocational skills training is a step in the right direction as this will not only boost their economic status but can also lead to job creation.

" As an office, we are always grateful when other partners offer the youths vocational skills training this is the way to go because apart from empowering the trained youths economically it can also offer an opportunity in job creation", said Mhoni.

Malawi is one of the poorest countries in the world with 50.7 % of the population living below the poverty line while 25% lives in extreme poverty - according to the IMF

The country like many other countries has a vibrant youth population but unemployment is very high.

According to 2019 - 2020 estimates from the International Labor Organization - ILO, over 7% of Malawi's youths are unemployed.

WACRAD program manager, Harvey Munthali feels the vocational skills initiative is paying dividends among communities of Edingeni in the area of Inkosi Mmbelwa.

Munthali said about 75 youths went through three months of vocational skills training which were being conducted by TEVET in 2015.

The training was being conducted under the organization's project dubbed 'child-centered Community Development' project with funding from Help A Child Malawi.

WACRAD pumped 20 million kwacha from Help a Child Malawi to have the youths trained in vocational skills of their choice.

According to Munthali, the organization was compelled to facilitate the training following a 2010 baseline study which revealed that most youths in the area were unemployed and were facing a myriad of challenges owing to a lack of technical and vocational skills.

"The skills development support endeavors have enabled the youth to become self-reliant as most of them have opened up their own businesses where they are self-employed and are employing their fellow youths", says Munthali.

For Peter Ngwira and Mapopa Nyirenda and other youths who attained various vocational skills through WACRAD ' child-centered community development' project, the future is now bright.