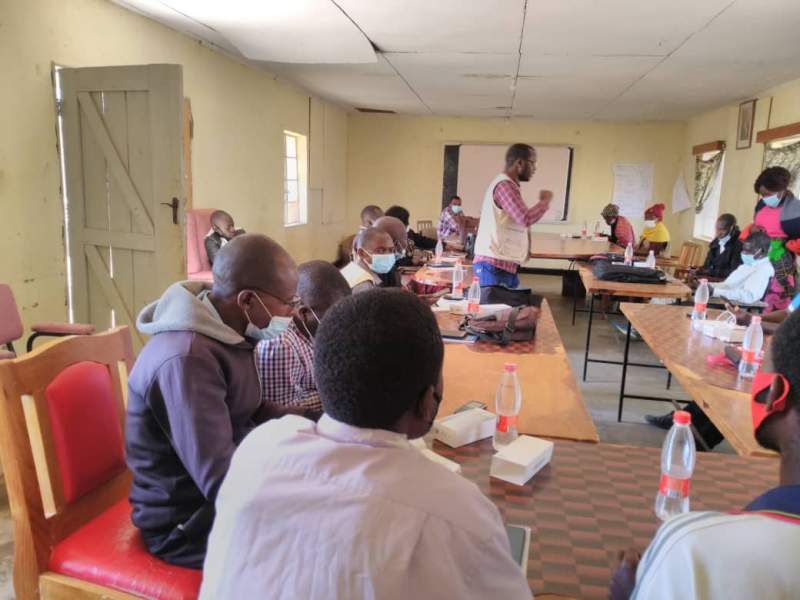 Farmers being drilled on how to use the smart phones

For some time now Margaret  Kanyinji of Kazomba extension planning area in Mzimba South has been struggling to find alternative methods of agriculture in the wake of climate change.

Every year, Kanyinji was also being haunted by the scarcity of markets for her farm produce.
"Unlike in the past now it's very rare to be visited by an agriculture extension worker who can share instructions of new methods of farming", says Kanyinji.
" Above all when we grow our crops like maize, groundnuts, soya finding markets is another challenge, Admarc is unpredictable nowadays so we just sell our produce to vendors at very very low prices"
However, the tide is about to change for Kanyinji and many other small-scale farmers in Mzimba south owing to the Market Capacity Building MCB project being implemented by the agriculture office and the Food and Agriculture Organization FAO.
The project which is being implemented in Mzimba and Kasungu aims at bridging gaps in agricultural extension services and ensure that farmers are easily accessing markets for their produce.
The project also strives to ensure that there is an increase in the number of smallholder farmer groups that can have bargaining powers when selling their produce.
To complement such efforts 39 farmers in Mzimba south have been provided with Sam Sung smartphones which among others will be used in accessing markets, agriculture extension services as well as the formation of chart forums where farmers will discuss various issues that concern them.
This has excited farmers like Kanyinji who have benefited after being given phones.
"We commend FAO for the smartphones they will enable us to improve our farming a lot as we will be sharing information with other farmers", said Kanyinji.
Another farmer,  Lloyd Msiska feels with the smartphones, farmer groups have been given a platform that will make it possible for them to accessing markets in time.
"I am very excited with the phones which we have been given because we were finding a lot of challenges to access markets for example last year we failed to sell our legumes because we did not realize that there were good markets out there", said Msiska.
Mmbelwa district council director of agriculture, environment and natural resources Ezra Mbendera says the smartphones have come at the right time as the district has a shortage of extension workers.
According to Mbendera for every 2000 farmers, there is only one agriculture extension worker hence the smartphones are crucial in bridging existing gaps.
The farmers the beneficiaries of the phones had to undergo training on how they can use the phones in promoting knowledge sharing in farming methods and prevailing markets for their produce.
Published in: News In Northern Region
Read 1579 times
Tweet
Rate this item
(0 votes)