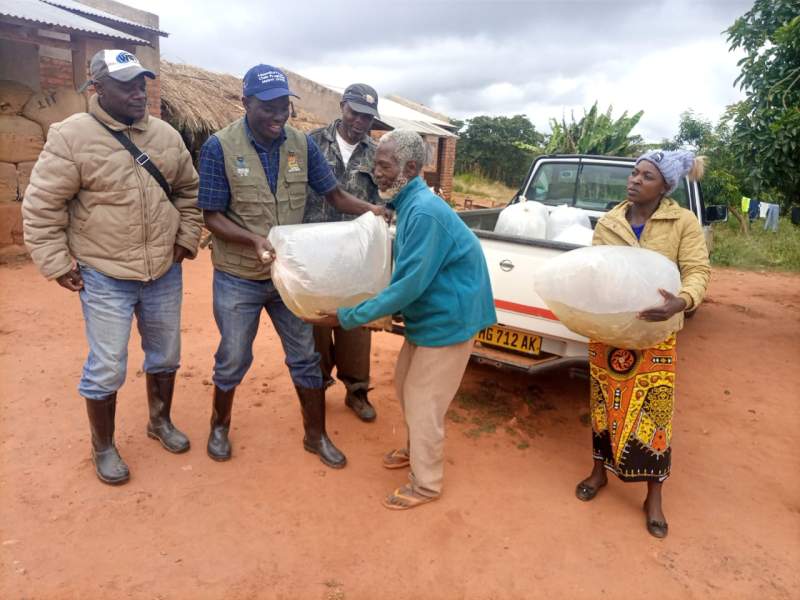 Distributing the fingerings to farmers

The Department of Fisheries says the use of recycled fish fingerings by fish farmers and scarcity of fish feed are major setbacks rocking the sector which has the potential to provide for the country's nutritional security as fish forms 70% of dietary protein intake among Malawians.

District fisheries officer for Mzimba Andrew Saukani says the use of recycled fingerings has a negative impact on the yield as growth in fish is retarded.

"Most fish farmers are using recycled seed which has lost genetic purity not to grow well hence we need to empower and train many fish farmers on how they can operate their own hatcheries", said Saukani.

He says as a department they realise that fish farming guarantees household nutritional security and improves the economic status of families.

"Currently 70 percent of fish being caught in lake Malawi is Usipa which is a less value fish species compared to chambo,bombe and other big fishes hence raising chambo in ponds and cages that can be sold at high prices even get processed we can provide nutrition for the health of the Malawian population and incomes to those engaged in fish trading and operations within the fish value chain", said Saukani.

On the scarcity of feed, Saukani said currently the department is in the process of commissioning a fish feed mill in Mzuzu in efforts aimed at doing away with challenges farmers face in accessing the fish feed.

Meanwhile, the district fisheries office through the UNDP-funded Climate Resilience Initiative in Malawi (CRIM) project has distributed 33000 fingerings to fish farmers around Mongo and Luhomelo in an effort to boost fish farming.

One of the fish farmers who have been given the fingerings, Happy Phiri of Chigwiti village in the area of Inkosi Kampingo Sibande said the fingerings will go a long way in improving his family's nutrition needs and in income generation during harvest time.

"Though am a new fish farmer I understand that those who use recycled fingerings do not have enough yields so am very grateful for the gesture from the fisheries office as they have also given us training on how we can ensure that we do well in our farming", said Phiri

According to statistics, there are over 600 fish farmers in Mzimba and 700 fish ponds with most of these around Manyamula extension planning area.