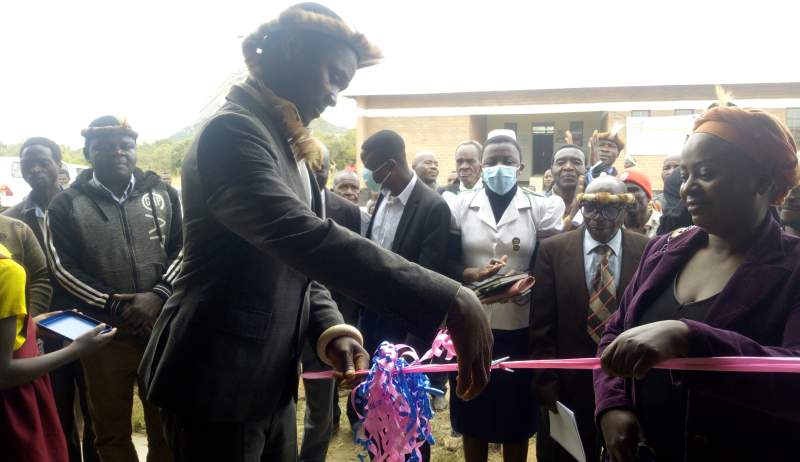 For communities around the area of Group village man Thomas Nkosi around Emoneni in Mzimba accessing quality health care had always been a hassle: sick people had no choice but to travel over 12 kilometers to Mzalangwe Health Center or over 15 kilometers to Lunjika Mission Hospital of the Seventh Day Adventist Church.

It was even harder for pregnant women where sometimes they ended up giving birth while on the way.

"We have lost babies and women while on the way to access care at these far away facilities even under five children have lost lives while being taken to these facilities," laments Group Village Headman (GVH) Nkosi.

However, communities in the areas of Inkosi Chindi, Inkosi Mthwalo and Inkosi Kampingo Sibande can now breathe a sigh of relief following the construction of Hora Health Center near the famous Hora Mountain.

The health center, which will be serving a population of over 10000, was constructed by Lukalazi Development Foundation to the tune of over K90 million.

Apart from the main clinic, there is a maternity wing whose construction was supported by Dr Gerold Fiddler through the International Club of the Schlitzohren Germany. The Outpatient Department (OPD) building and two houses at the facility were financially supported by the German ministry of economic cooperation and development and the Malawi Hilfe Gelnhausen.

Director for Lukalazi Development Foundation Omega Kaunda says they constructed the facility after noting the challenges especially pregnant women in the area were facing to access good quality health care.

"We saw the need for such a facility here mainly it was through discussions we had with Inkosi ya Makosi Mmbelwa V that we decided to come up with such a project you know people in this area were finding a lot of challenges to access health services," said Kaunda.

Such concerns are echoed by Mmbelwa District Council Director of Health and Social services Dr Ted Bandawe who says the facility will help in reducing the mortality rate in the district, especially among pregnant women.

"We, as a district, are excited with the construction of hora health center as it will reduce the mortality rate especially among women who may have various complications during labor," said Dr Bandawe.

"So, physically counting only last year we lost 22 women and the construction of facilities like these will help a lot in curbing such deaths as women will be accessing health care close to their villages," said Dr Bandawe.

Chairperson for Mzimba Heritage Association (MZIHA) Rev. Mazunda is also upbeat seeing the facility constructed at the foot of Hora Mountain which is of historical value to the Ngoni of Mzimba.

"We, as a heritage, cannot emphasize much on the importance of the facility considering that every year we hold the Umtheto cultural festival at the foot of the mountain so this hospital will not only serve people of the area but even those from faraway places who come for the festival," said Rev Mazunda.

Presidential Advisor on NGOs and civil society Martha Kwataine commended Lukalazi Development Foundation for the initiative, saying unlike other organizations that receive a lot of funding but has nothing to show on the ground, the foundation has shown commitment to improving the people’s access to health care.

"We are now at Euthini Hospital finishing up the theatre which was already started by the community but the DHO asked if we could help out finishing construction works of the said theatre and we are also constructing female and male wards to complement the great need for admissions at Euthini hospital," said Omega Kaunda.

The foundation is also renovating the ODP building, maternity wing and two staff houses at Madise Clinice while in the education sector it is constructing St Luke’s primary school in Nkhata Bay district.