Law and Order Must Prevail in Malawi - Pickering 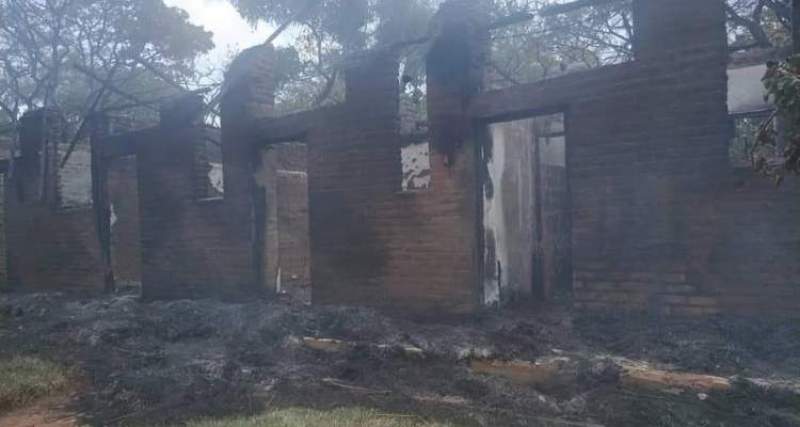 part of the burnt structure photo by Linda Tembo

The arsonists are suspected to be encroachers, according to the Director of the property Guy Pickering.

Offices housing Kusamala Institute of Agriculture and Ecology, Kumbali Base Camp and Kumbali Kindergarten as well as 7 vehicles belonging to Conservation Research Africa got damaged in the arson attack.

Pickering says this was avoidable as all relevant authorities including the Homeland Security Ministry, Ministry of Lands and the City Council to mention a few, were alerted about four months ago, but chose to ignore it.

He feels let down.

“Who else was I to tell?” lamented Pickering.

Esther Thwalo, an office assistant at the Conservation Research Africa was asleep when it all began at around 3 a.m Sunday.

“I could hear noises in my sleep. I was nervous to get out of the house until someone knocked on my door asking me follow him. He did not tell me where we were going as we trekked through the bushes running towards the lodge. That’s when he explained that our lives are in danger,” said Thwalo.

We gathered that warning signs started reaching the property on Saturday evening when some security personnel were deployed to enforce a court order that the land encroachers stop their activities.

Patrick Chauma, a guard at the premises told us that the villagers were irked at the arrest of their fellow villagers suspected to be leaders.

“I have been to Kumbali Lodge before over the same issue. The people are stubborn. With what they have done, we will not relent,” said Chimwendo Banda.

When she visited the scene on Monday, Deputy Minister of Lands Abida suggested that Pickering gives away part of his land to the community as a measure of reaching an amicable solution to the conflict.

“we have been in talks over this for a while now. It is unfortunate that it has come to this. This is very deplorable. We are trying to reach an agreement with Pickering that if he could consider giving away part of his land to the people, maybe it could help,” suggested Mia.

However, she could not state as to how much land Pickering could give away from his 650 hectares, saying, “it’s at his discretion as in how much land he can give away if he at all considers doing it. He is the legal owner of the land. I am just suggesting otherwise it is not our place.

However, Pickering thinks “law and order in the country are the only surest way to resolving this matter,” describing what happened on Sunday as “mere vandalism” and not a land matter as it seems.

Meanwhile, 48 people have been arrested over the matter pending their court appearance.

Zodiak finds that the encroachers are reselling the land to wealthier people at a cost for their survival.