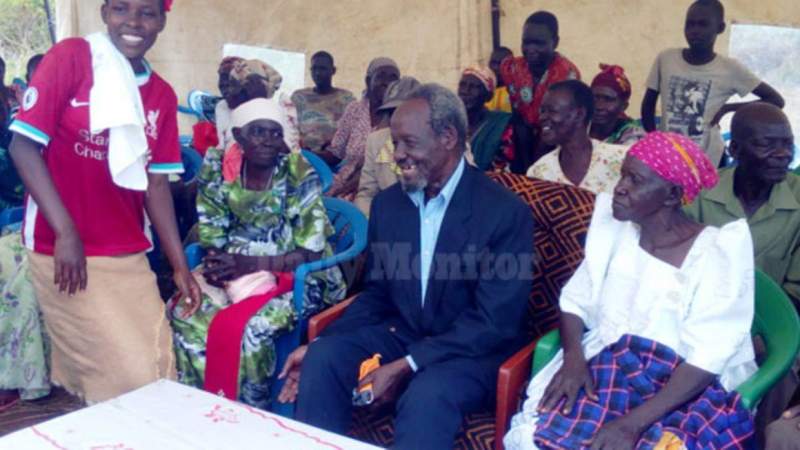 Vincent Obodo sits between his two wives Josephine Ariamo (right) and Anna Loyce Ideta as the family welcomed him back home in Agora Village, Soroti District, on Friday. Mr Obodo, a former President Milton Obote aide, had been in exile in Tanzania. PHOTO /SIMON PETER EMWAMU

Emotions run high in Agora Village in Soroti District on Friday afternoon as two wives were reunited with their husband, assumed dead for the past 51 years.

Mr Vincent Obodo, the personal overseer of late President Milton Obote’s security and family, went into exile in January 1971 after the late Idi Amin toppled his boss while in Singapore.

That was the last time his wives Josephine Ariamo, 76, and Anna Loyce Ideta, 71, set eyes on their husband.

The duo, their children, relatives, and Obodo’s agemates sobbed and yelled as the UNHCR staff vehicle strolled through Agora to bring back a man, who was struggling in Tanzania after failing to come to terms with the overthrow of his former boss.

Ms Ariamo, the elder wife, says they thought their husband was dead because there had never been any communication nor any clue of his whereabouts since 1971.

“In the earlier days when he went missing, we consulted with other UPC (Uganda Peoples Congress) stalwarts, but to no avail until last month when we received a call from the Soroti City West MP-elect (Jonathan Ebwalu) that our husband is alive, and United Nations High Commission for Refugees (UNHCR) was making arrangements of settling him home,” she told Daily Monitor at their home in Agora.

Ms Ariamo says when UNHCR communicated, it raised their anxiety when they remembered a man, who in his youthful days, was a breadwinner, a companion and a comforter.

“He equally loved us, he was a jolly man and passionately spoke great things about his former boss Obote. I believe coming to terms with the overthrow of his boss broke him, we thank God he is back,” she says. Obodo,81, is one of late Obote’s strongmen to return home alive.

Ms. Ideta, his second wife, says the reunion brings back the memories of their heydays as a young couple.

“It is hard to believe, but he is here, we thank those who have enabled him to arrive home,” Ms. Ideta says.

She adds that while he was away, they produced other children with other men but never moved out of the marital home.

“It shouldn’t have been so if those political dynamics, which set our husband to flee for his life, had never happened,” Ms. Ideta says.

Mr. John Ekoyu, his son, says when he was contacted about the arrangements, he sought help in Tanzania since he knew his father had already died.

“The call came on April 14 when I broke the news to my mothers, brothers, and sisters, they never took me seriously, they claimed I was reawakening the bad memories of my father’s death,” the 56-year-old recalls.

Mr Ekoyu says after the government okayed the UN flight for Obodo to return home, he recognized his father.

“His colour complexion, the eyes, and head resembled those of his cousins, so I knew that the person I was receiving was my biological father,” Mr Ekoyu says.

He adds that his father’s absence has been tormenting.

“I started being the head of the home at 10 years, building on resilience and undertaking the role of being a breadwinner for both my mothers during the most difficult times of insurgency in Teso. I thank the Almighty Lord for His grace that has enabled us see our father,” Mr Ekoyu says. Mr Ebwalu says it is a day of joy that one of the former Teso greats has returned home alive.

“Having served as an assistant commissioner under Bukedi District, it is our request that government advances him some support for his resettlement,” he says.

Recalling how he ended up in Tanzania, Mr Obodo says Obote never heeded to intelligence reports about the coup plot, and insisted on proceeding with his flight to Singapore. The next day, the government was toppled.

“I arranged to whisk my boss to Jomo Kenyatta International Airport for asylum in Tanzania. That is how I found myself in Tanzania,” he says.

Mr Obodo says when Obote regained power, he remained his emissary in Tanzania until he was overthrown.

“Life in exile has been a thicket of thorns,” he says, adding that it denied him the opportunity to do things that he should have had he been home.

The reunion was marked with a thanksgiving ceremony.

Ms Carol Kibuka Musoke, UNHCR Protection Associate, says the resettlement was made possible after work by both the government of Uganda and Tanzania. She says UNHCR continues to carry out voluntary repatriation of refugees to their countries of origin.

Adopted from the Citizen