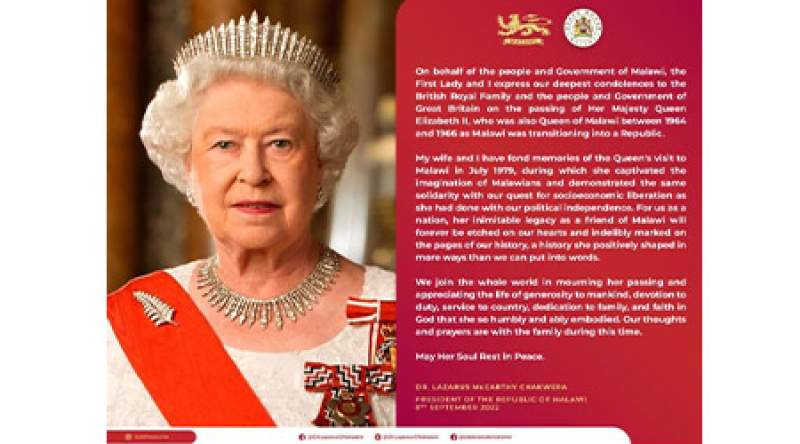 The UK's longest-serving monarch died Thursday at Balmoral, aged 96, after reigning for 70 years.

Her death came after hours of speculation about her declining health earlier during the day, and key members of the loyal family cancelling all their engagements to travel to Scotland.

In his condolence message to the British Royal family and the people of Britain yesterday, President Chakwera said in a statement that he and First Lady Monica will forever have fond memories of her inimitable legacy as a friend of Malawi.

“My wife and I have fond memories of the Queen’s visit to Malawi in July 1997, during which she captivated the imagination of Malawians and demonstrated the same solidarity with our quest for socioeconomic liberation as she had done with our political independence.

“For us, as a nation, her inimitable legacy as a friend of Malawi will forever be etched on our hearts and indelibly marked on the pages of our history, a history she positively shaped in more ways than we can put in words,” he said.

The Malawi leader said Queen Elizabeth II was a woman of generosity to mankind who was devoted to duty, service to her country, dedication to family, and faith in God.

Her eldest son, Charles, is now the new King but will be officially crowned after the funeral, according to British tradition.

It is just earlier this week that Queen Elizabeth II symbolically appointed Truss as prime minister after her election by the Conservative Party on September 6.

The Queen came to the throne in 1952 and witnessed enormous social change, both in the UK and the world at large.

As the new king and head of state for 14 Commonwealth realms, Charles, formerly the Prince of Wales, is leading the country in mourning her mother.