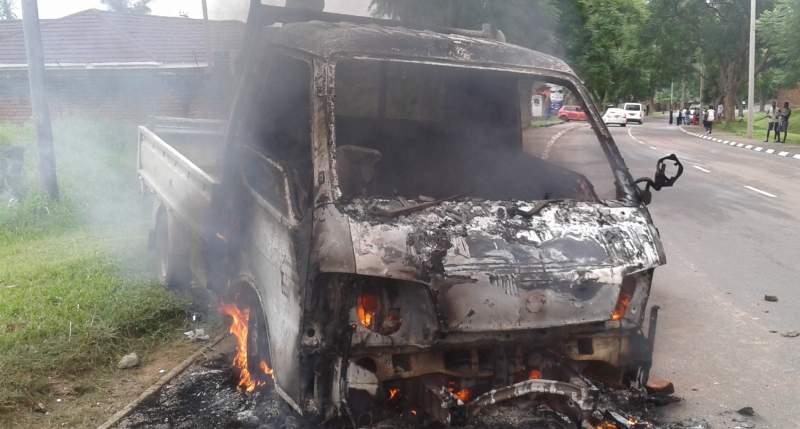 End of the road; the vehicle that entertained people during the demos - Pic by Happy Njalam'mano

Police in Blantyre have launched investigation into Thursday’s incident where unknown people torched a vehicle that was used to carry the Public Address system during the Anti-Jane Ansah street protest.

“We would like to get more details on the thugs and when they are arrested, they will be taken to court and will be charged with malicious damage,” said Nkhwazi.

Sub Inspector Nkhwazi said that “an unknown vehicle, Mazda Demio, without registration number, blocked the vehicle in front and another one, Nissan Vanette, blocked it from behind.

“From the two vehicles alighted the unknown thugs who were armed with panga knives and axes and other related dangerous items. They started assaulting the driver and the DJ but they managed to escape. That gave an opportunity for the thugs to torch the said vehicle.”

He added that the vehicles driver, Vincent Waya, and the DJ, Piason Amos, were coming from a place where they dropped the PA system.

The Coalition also wants the Anti-Corruption Bureau to release names of people suspected to attempt to bribe some of the judges handling the high profile elections case.