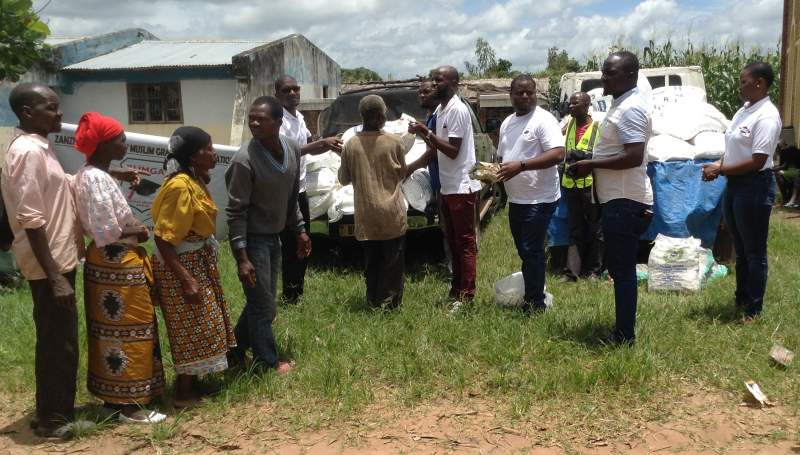 Some of beneficiaries during the donation - pic by Cassim Aubi

Some hunger stricken families in Machinga have called for more food support, saying the hunger situation is now going out of hand as some people are reportedly fainting of hunger in the area.

Traditional Authority (TA) Nkoola says the food crisis that has hit the area has reached alarming.

"Government has assisted us with 1, 200 bags of rice and other partners have also responded by providing relief food to some families, but the problem is still there since the number of people that have no food is higher," said the T/A.

"The area has a total population of over 50, 000 people from 16, 000 households but so far less than 2, 000 households have been reached with food assistance," added the chief.

Gogo Mary Injesi from the area also said the food crisis is putting lives of people in danger as it has already started affecting their.

Meanwhile, Zanzibar University Muslim Graduates Association (ZUMGA), with support from Fargo Limited and contributions from members, has assisted 140 hunger stricken families from TA Nkoola area with 25 kilogram bags of maize flour among other food items to each of the families.

ZUMGA chairperson for Blantyre Chapter, Daniel Kamanga, said the donation is aimed at alleviating the sufferings the people are going through but urged everyone to assist with the little they can manage, saying the situation remains bad.

Machinga District Council Spokesperson, Patrick Ndawala, confirmed many areas including TA Nkooola, Sitola and Mchinguza have been hit with hunger but said no person has died of the same.