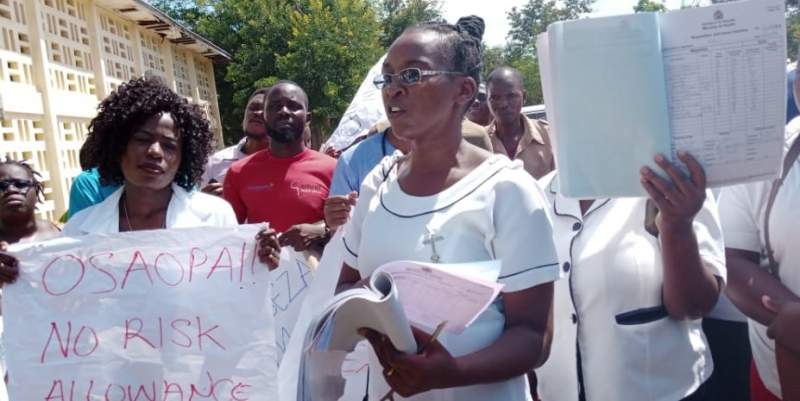 Striking workers during the protest - pic by Christopher Sande

Health workers in Chikwawa district have presented a petition to the District Commissioner asking him to urgently intervene on lack of personal protective equipment in awake of the COVID-19 pandemic.

The health workers marched peacefully from the district hospital to the district commissioner on Wednesday where they also demanded the immediate recruitment of temporary workers to work on permanent basis.

They also carried some flip charts with words which read, 'don't fear, no personal protective equipment, no work.'

The workers say they feel very unsafe to continue working without personal protective equipment when the district has one COVD-19 patient with several untraced suspects.

District commissioner Ali Phiri said he is currently consulting authorities on how to address the health workers’ grievances.

This comes as there are reports that several citizens coming from South Africa are still entering Malawi through uncharted routes including Gola in Chikwawa and Mitsamvu through Mwabvi Game Reserve route in Nsanje to evade being screened for Corona virus.

Director of parks and wildlife Brighton Kumchedwa told us that the department is working hand in hand with the police and health officials in Nsanje to follow up the matter.