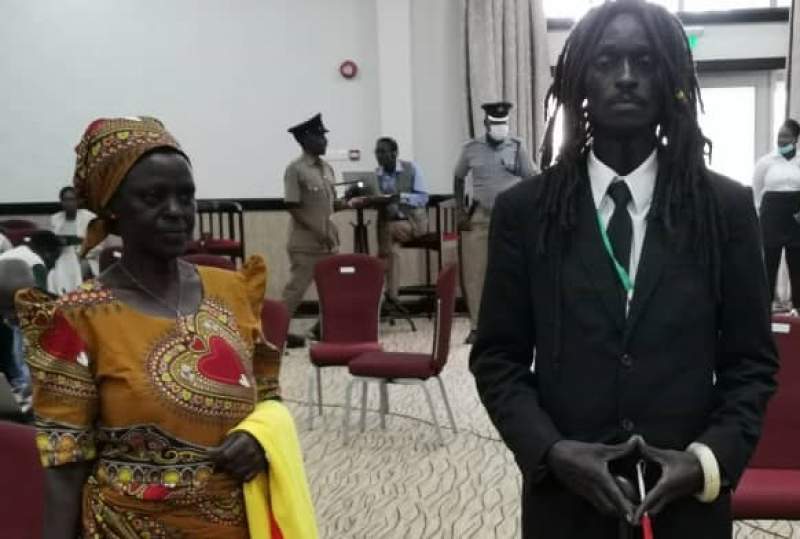 Ras Chikomeni and his mother upon arrival at the hotel

There was drama at Mt. Soche hotel in Blantyre where presidential candidate are presenting nomination papers for the Fresh Presidential Election slated for 2 July, 2020.

It all began when candidate Ras David Chikomeni Chirwa failed to prove his qualifications for the race after it was observed that he did not pay K2 million nomination fee.

Ras Chikomeni also failed to collect ten signatures from the country’s districts to support his bid for the contest.

Looking angry, Ras Chikomeni told commissioners of the Malawi Electoral Commission that his sponsors are in South Africa and could not come to Malawi with the money following travel restriction in line with COVID-19.

This brought the room into laughter after Chikomeni’s ordeal, as it is a replica of last year’s event when he was disqualified for the same factors.

Just like last year, Ras Chikomeni arrived with his mother whom he picked as his running mate.

Chikomeni refused to take back the incomplete nomination papers from the commissioners, saying he collected them from the Commission and they remain a property of the Commission.

His mother took them back on his behalf instead.

His mother told journalists that she is “hopeful that one day my son will be the president of Malawi.”

As if that was not drama enough for the day, another candidate, Reverend Hadwick Kaliya, only arrived in the room to surprise the people when he announced that he will not contest in the election.

He told the Commission that he has instead endorsed the MCP-UTM Alliance.

Kaliya threw his weight behind President Peter Mutharika after the nullified elections that was held in May last year.

Candidates are presenting their nominations ahead of the election that will be conducted following nullification of last year’s presidential poll.