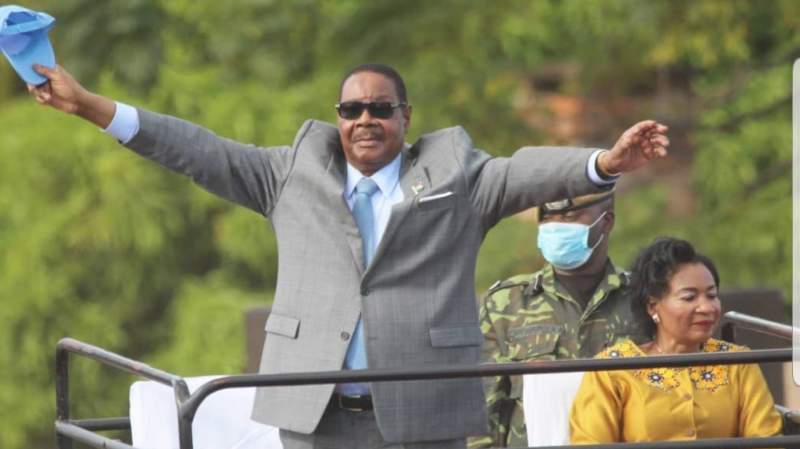 Mutharika during the campaign whistle stops in Thyolo - internet pic

Presidential candidate for the governing Democratic Progressive Party (DPP), President Peter Mutharika, has joined campaign after a month since its opening.

Mutharika has been indoors since May 7th when he presented his nomination papers to the Malawi Electoral Commission (MEC) to run for the Fresh Presidential Election.

His running mate, Atupele Muluzi, has been running across the country in a campaign trail convincing electorates to vote for them.

However, on Monday, Mutharika left Sanjika Palace in Blantyre to appreciate innovations by the Malawi University of Science and Technology in Thyolo aimed at fighting COVID-19.

Mutharika then proceeded with a campaign trail by conducting whistle stops at Goliyati, Thyolo boma and Bvumbwe Trading Center in the district.

The incumbent president took a swipe at former vice president, Joyce Banda, in responding to her allegations that Mutharika is a drunkard.

Banda made the allegation during a Tonse Alliance political rally at Njamba Freedom Park in Blantyre a week ago where she alleged that Mutharika got very drunk during an official trip to China some years ago.

But Mutharika disputed the allegation, saying he doesn’t drink Kachasu (a local brew) but red wine.

“That is a lie. I don’t drink Kachasu. I drink red wine. My feud with Joyce Banda started in China when she wanted to sleep in a room next to my brother’s [former president, late Bingu wa Mutharika]. I refused that.

“Nnamuuza kuti zauhule zakezo asabwere nazo kuno (I told her not to bring her prostitution to China). My brother eats msima; he doesn’t eat husks,” he said.

Mutharika then turned to the judiciary for “judicial coup d’etat.”

He told a gathering that he won last year’s election but the constitutional and Supreme Court of appeal conspired with the opposition to rob him government.

“The courts did not use evidence available to determine the judgment. We will win this election again with a landslide,” he said.

Leaders of opposition Malawi Congress Party (MCP), Lazarus Chakwera and UTM’s Saulos Chilima challenged presidential results of May 21, 2019 elections in court on grounds that it was marred by a plethora of irregularities.

The Constitutional Court nullified the election and the ruling was upheld by the Supreme Court of Appeal.

There is, however, mist over the polling date.