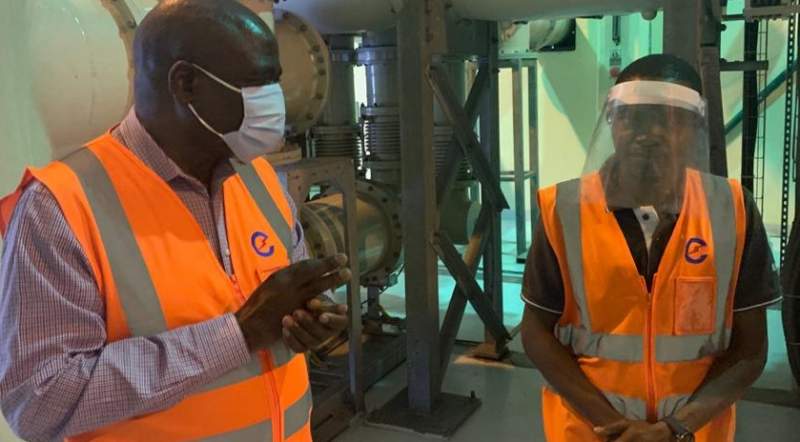 Kambala (left) during his visit at Kapichira - pic by Christopher Sande

The Ministry of Energy has indicated that government will turn all alternatives to add more megawatts to the national grid a reality in order to surpass the 2025 target of 30 percent of Malawians having an access to electricity.

Minister of Energy Newton Kambala has said that his ministry is working with speed to also generate power from solar and wind so as to improve the national grid from 500 to 1, 000 megawatts.

Speaking during an impromptu visit to Kapichira hydro power station in Chikwawa on Friday afternoon, Kambala said it is displeasing to note that some machines are not working at Kapichira thereby disrupting power generation.

The minister said government is aware of nonfunctioning machines currently sitting idle in some hydro power stations and that his ministry is making all fast steps to fix them.

"The experts to work on the machines are currently in Germany. Now with the COVID 19, it has been difficult for them to come and repair them. But we are working very hard to make sure the machines start functioning," said Kambala.

He added that government wants to make sure that other sources of making power like solar and wind are fulfilled to improve the national grid from 500 to 1, 000 Megawatts.

"I am of the view that more than 30 percent of Malawians should have access to electricity by 2025," he said.

The Minister's sentiments come when the country is still experiencing load shading because of damaged machines in power stations and low levels of water in Shire river which the country largely depends on to generate power.