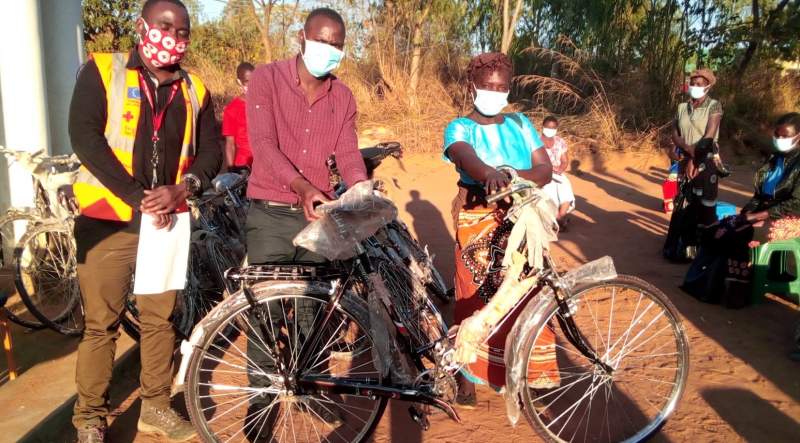 The handing over ceremony - pic by Steve Kalungwe

As Covid19 pandemic still raise havoc among the vulnerable groups of people in the country, affecting their livelihoods, including meals, Malawi Red Cross Society (MRCS) has donated 70 bicycles to promoters worthy four million Malawi Kwacha in a drive to Scale Up Nutrition among the under five children.

Speaking to Zodiak today, when handing over the donation, Neno Red-Cross Society district coordinator Wanangwa Nkhata said the bicycles will ease mobility of the promoters in reaching out to caregivers who are often times found in hard to reach areas.

"We thought of making this donation of 70 bicycles, each at 60 thousand Malawi Kwacha with an aim of making sure that breast feeding massages are delivered even to mothers in hard to reach areas as we are also observing the Breastfeeding week", said Nkhata.

Nkhata noted that with Covid19 pandemic, stunting growth could rise as most parents now are finding it hard to provide for their homes due to loss of jobs and closure of businesses.

"Like here in Neno, we are at 45 percent in stunting among the under-five, so with Covid19, this figure is likely to rise hence our intentions of reaching out to breastfeeding mother's through promoters with messages of hope", narrated Nkhata.

One promoter, Rabbeca Stand of Donda four village said the bicycles will help them reach to mothers in time and submit reports on nutrition on time unlike in the past when it was challenging to do the job.

In his remarks, Neno district Principal Nutrition and HIV/AIDS officer Patrick Manyowa hailed Red-Cross for the donation while asking lactating mother's to follow all hygiene, including frequent washing of hands with soap and wearing of face masks whenever they are breastfeeding to avoid the Corona virus.

The Society will also make a donation of Personal Protective Equipment to its Promoters and care givers in a bid to contain the further spread of the Covid19 pandemic in Neno district.