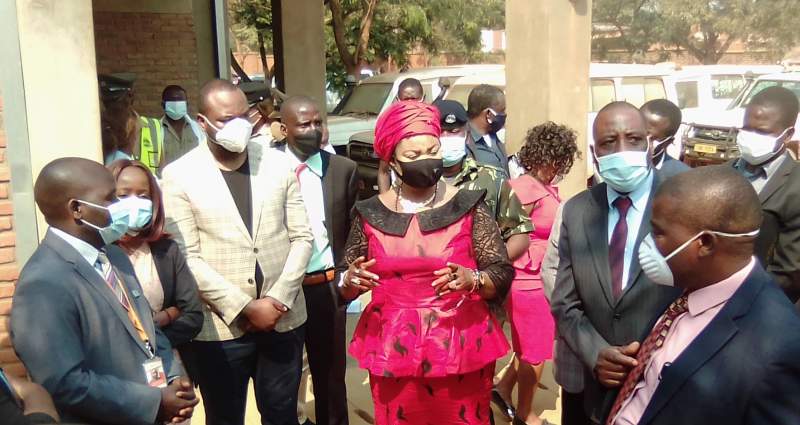 Kaliati inspecting some of the PIH interventions - pic by Steve Kalungwe

In drive to make lives of poor communities bearable in Neno district, an International Non-Governmental Organization, Partners in Health, has promised to continue with its humanitarian support to the district in terms of health, education and infrastructure development.

The commitment comes after minister of Gender Community Development and Social Welfare Patricia Kaliati visited some of the projects, which include housing for the elderly,  bursaries to needy children and a state of the art Neno district hospital, the organization is implementing in the district as part of a tour of appreciation.

Minister Kaliati was however not convinced on why the organization opted to refurbish Neno community hall and ground to accommodate Covid-19 quarantine and isolation centers which are close to a busy market and Neno council staff houses.

“The organization is doing a commendable job here, but it should construct its own structure to be used as an isolation center, these government structures are meant for community activities", said Kaliati.

PIH country director Dr Luckson Dullie responded to the call, saying his organization opted for the government structures in a temporary way as Covid-19 struck when it was least expected, and a permanent structure will be put out any time at a place yet to be identified.

"We will construct a new permanent structure to accommodate Covid-19 response in the district", he said.

NGO board director Voice Mhone whose board identified PIH as being among the twenty best performing NGO's in the country said it was pleasing to see the organization performing a hardware approach to its agenda as opposed to other NGO's who only exist on paper.

"This organization is doing exactly what it reported to us, even more as we have seen this government hospital being constructed by them, and still funding it's activities which is very encouraging", said  Mhone.

The Gender minister has however advised the people of Neno to take full responsibility of the structures and support being rendered by PIH, saying it's a golden opportunity to have an NGO which is fully complimenting government efforts.

Kaliati also called the Welfare office in Neno to end child marriages by 31 August, saying it's a shame to hear that a lot of young girls are getting pregnant due to school closure saying this could scare organizations like PIH which is pumping in a lot of money to support education in the district.