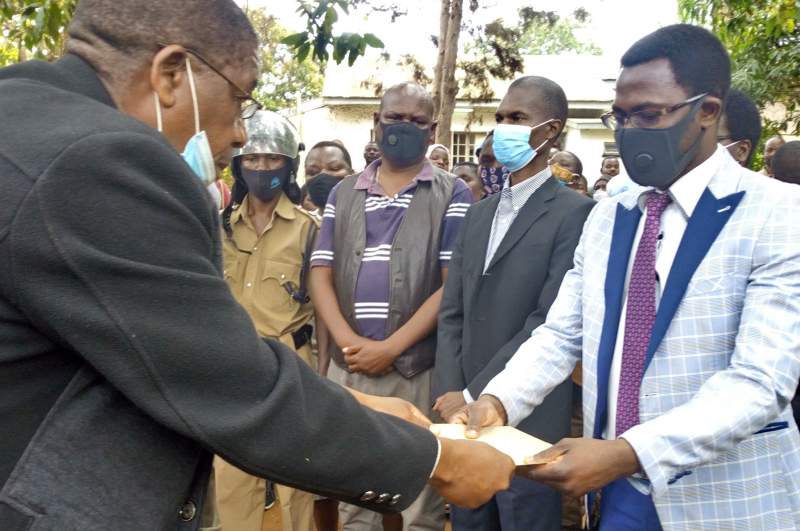 Representative of the community presenting the petition - pic by Hastings Jimani

There were also security marshals amidst the marchers.

Leading the marchers was Martin Komiha who said people are not happy with a decision that Chitakale Tea Estate Company which is owned by Mr. Leston Mulli wants to turn Chitakale football ground into a sugarcane field.

“We have given the DC a three day ultimatum to respond to our petition and ensure that the company’s decision does not materialize,” said Komiha.

Apart from the ground issue, the petition which Zodiak Online has in possession says Chitakale Tea Estate Company does not want to respect the boundary between the company and Kumwamba village, the company is violating the country’s labour laws by abusing its workers, does not want to implement any project as a Corporate Social Responsibility (CSR) and does now want to produce a Memorandum Of Understanding (MOU) it signed with Government.

“I will look into the petition critically and engage all concerned parties to ensure that there is peace in the district,” said Mwambiwa.

In an interview later after the demonstrations, Mr. Mulli, said the ground is within Chitakale Tea Estate Company and said the marchers were just thugs.

“What people are alleging is not true but we just want to rehabilitate the ground, the dressing room and construct toilets around the ground and not turning it into a sugarcane field as is alleged,” said Mulli.

The demonstrators after presenting their petition returned home peacefully as well in escort of police up to Kumwamba village.