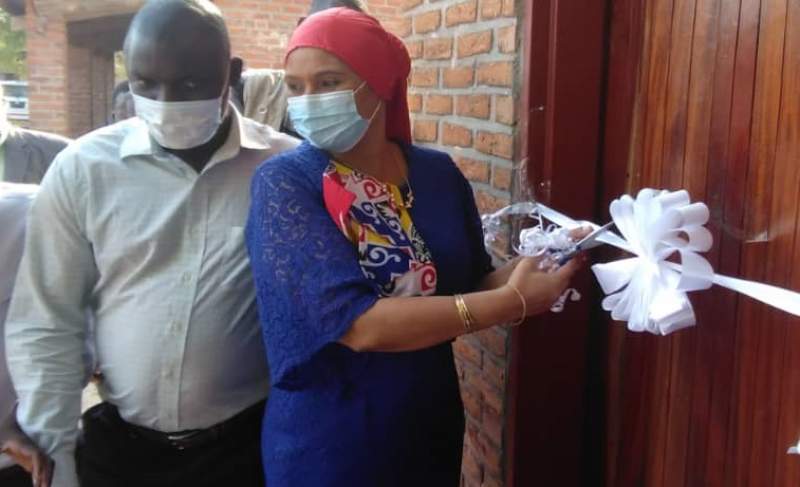 Mia handing over the block - Pic by Christopher Sande

Communities in Chikwawa have asked government to improve the condition of feeder roads in order to promote easy access of social services and conducting business activities in a favorable environment.

Chairperson of Kandeu Village Development Committee in Chikwawa North constituency Dramani Banda told Zodiak on Friday that for instance the road from Mwivuza to Chavala is in a poor condition posing serious challenges to villagers.

He said this is making people struggle to access other social services like health and doing business activities.

"The road from Kandeu to Chavala is in very bad state. People of two areas struggle to access social services. When we carry funeral, we drop the dead bodies at Miseu Folo because ambulances cannot proceed to Chavala," said Banda.

While commending government for constructing the 18 million kwacha Mwivuza Bridge using the Constituency Development Fund, CDF, he asked for the grading of the Chavala road.

The Chikwawa Director of Public Works Isaac Mdindo told us that they are trying their best to complete all projects, some dating from 2015.

Mdindo explained that currently 47 out of 57 CDF projects have been completed in Chikwawa North, West, South and Chikwawa Nkombezi.

"Most of those completed projects are teachers’ houses, school blocks, bridges and a Mortuary at Ngabu rural," said Mdindo.

Currently, Parliamentarian for Chikwawa Nkombezi Abida Mia has handed over a 13 million kwacha CDF school block at Makande with a call to girls to stay focused on their studies.

"We want to thank Dr Lazarus Chakwera's government for increasing the CDF from 30 to 40 million kwacha," said Abida adding that this will promote smooth implementation of projects in constituencies.

Mia who is also Deputy Minister of Lands further stated that with support from government and other partners, she will help all constituencies in Lowershire to have equal development opportunities.

Chikwawa district has six constituencies while Nsanje has five.