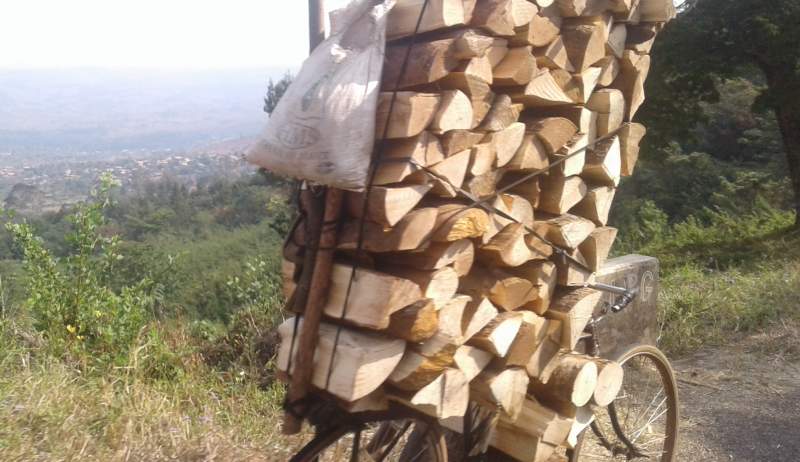 This is a common sight in Malawi's major mountains; this picture was taken in Zomba mountain - pic by Happy Njalam'mano

It's 10 a.m, and fog has covered part of Zomba Mountain, one of Malawi’s highest mountains. Hiking the mountain, it is a common sight to see women carrying piles of firewood on their heads and men loading wood on their bicycles.

One by one and in groups, they descend down the massif.

Janet Wasi is one such women. I spot her taking a rest under a tree the roadside with her big pile of firewood rested on the tree. Wasi is shy of the camera, not because her face is flooded with sweat on this chilly morning, but because she feels not photogenic. All in all, she is willing to talk.

"Ever since I was young, we have been coming up here to fetch firewood. This is our only source of energy but we are now struggling to find firewood as the trees are slowly becoming extinct," she said as she wipes her face with a dirty cloth.

"This pile will last us two to three days. We come here at least twice a week to collect firewood," said Janet.

Janet could not calculate the distance she and her daughter walk up the mountain to get fuel wood, "but it takes us about an hour to walk up there. It is hard labor of course but what else can we do? We need the firewood for our kitchens."

Monster in the kitchen

In the kitchen, Wasi faces another monster - smoke from the open fire she uses for cooking.

"We have regular coughs and other respiratory illnesses which we assume are consequences of the smoke. But we cannot do otherwise because that's our only source of fuel. Our ancestors used this; we grew up in this and our daughters are growing up in this," she said.

A 40-year-old mother of three, Delli Nesi, is one of the women who used to frequent Mulanje Mountain to collect firewood.

“We used to walk about 8 to 10 kilometers to get to the mountain twice a week. Life was unbearable. Besides destroying the environment, the smoke from the firewood was not good to our health.

“We were told at the hospital that the smoke caused various diseases because we were using more firewood at once,” she said.

Studies show that in Malawi, deforestation causes loss of 33,000 hectares of forest cover every year, mainly for agriculture expansion, tobacco growing and energy for cooking.

"Why?" I asked the MHL Managing Director. "Because water flows are very low up the mountain," said Ian McKersie.

"We only rely on rainfall to generate enough electricity. At this time of the year, we cannot generate enough to meet the demand because the water levels are so low," he said.

This is a clear sign that the mountain is feeling a pinch of climate change orchestrated by, among other factors, the lack of renewable and clean energy.

A little innovation is possible

The Mulanje Renewable Energy Agency (MUREA) was born to rescue both Mulanje Mountain from destruction and the users from the health hazards of using firewood.

Later, the organization hatched an idea of generating electricity from the nearby Lichenya River to supply the community with renewable and clean energy.

“Bondo area never dreamt of having electricity. We mobilized the communities and advised them to take care of Lichenya River for hydro-electricity generation. We told them that for them to have electricity, they must conserve the river. It worked.

“We were awarded a license as an Independent Power Producer and we now generate 268 kilowatts. This is supplied to over 1, 500 households in the area.

“We wanted to empower communities economically without using Mulanje Mountain for trees while providing them with renewable energy for cooking without polluting the environment. People here no longer cut down trees wantonly like before; instead, they are planting trees to conserve their source electicity, Lichenya river,” said Kadziponye.

Nesi testifies: “The coming in of electricity transformed our lives. People are now able to use electricity for cooking. We no longer cut down trees in the mountain as we used to before.

“People have opened up barber shops, welding shops, phone charging shops and football TV halls, among other income generating activities. They no longer need the trees for charcoal burning and other businesses.

“As for Chitetezo Mbaula, those using them only use two pieces of wood for cooking food instead of six to eight pieces in ordinary stoves. The stoves also produce less smoke than open fires which is good to health,” she said.

Malawi on Thursday, 13 February 2010, made a bold decision in its quest to deal with the impact of climate change by passing the Forest Amendment Act. It was in response to unprecedented impacts of climate change that had hit the Sub-Saharan country.

“This new piece of legislation will bring sanity in charcoal selling,” said the then minister of natural resources, energy and mining, Mr. Bintony Kutsaira, after parliament passed the bill.

The law, among other things, imposes a K100, 000 to K10 million Kwacha fine for people caught cutting down trees in protected areas.

This is, however, happening in a country where only 12 percent of its over 18 million population access electricity as of 2019. This electricity is also rationed to the few consumers with lots of load shedding being order of the day.

Electricity tariffs were raised by 32% in 2018 by the Malawi Energy Regulatory Authority (MERA), making firewood and charcoal the major cooking fuels.

“Firewood provides over 50% of the urban cooking fuel and nearly 100% in the rural areas,” reads the statistics.

MUREA has proved that it is possible to provide clean energy to communities using various climate smart technologies such as environmental friendly stoves.

All eyes are still on the day when majority of Malawians will have access to environmental and renewable energy sources enough and reliable to migrate them from the environment destructive energy that the world has ganged up against.