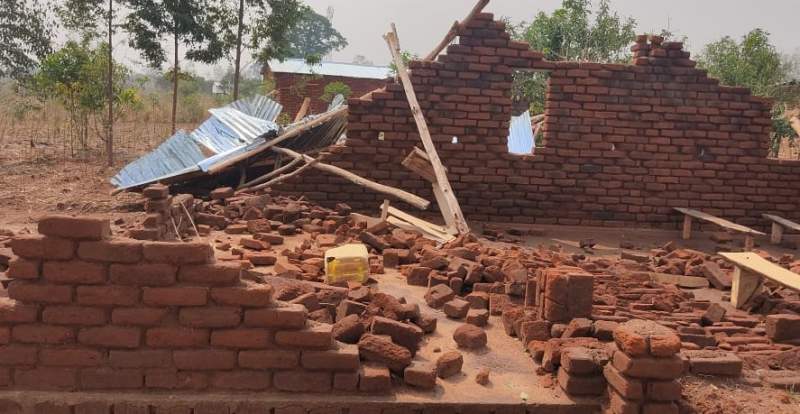 People's houses have been demolished - pic by Hastings Jimani

1, 238 households have been displaced in in Mulanje following heavy rains that fell in the district on Saturday.

District Relief and Rehabilitation Officer Maria Joseph told Zodiak Online that the winds also blew off roofs of school blocks at Supuni and Mpala primary schools and a kitchen at Mpala Health Centre.

She said nine people were injured and were treated as outpatients at Mpala health centre.

“We call for support in the form of food items and plastic sheets from individuals and organizations of goodwill to assist the affected families as well as affected public infrastructures,” said Joseph.

Meanwhile a weekly weather statement released on Monday by the department of Climate Change and Meteorological services says parts of the country will continue receiving rains up to Wednesday.

“Most areas in the north, centre and south will this week receive pre-rains locally called chizimalupsya and these rains will be accompanied by strong winds, thundery showers and lightning,” said Jolamu Nkhokwe, the Department’s Director of Climate Change and Meteorological Services.

Similar rains have also been experienced in Mzimba where a library, laboratory, staff office and 21 computers at Edingeni Community Day Secondary School have been damaged and a number of houses in the area have their roofs blown off.