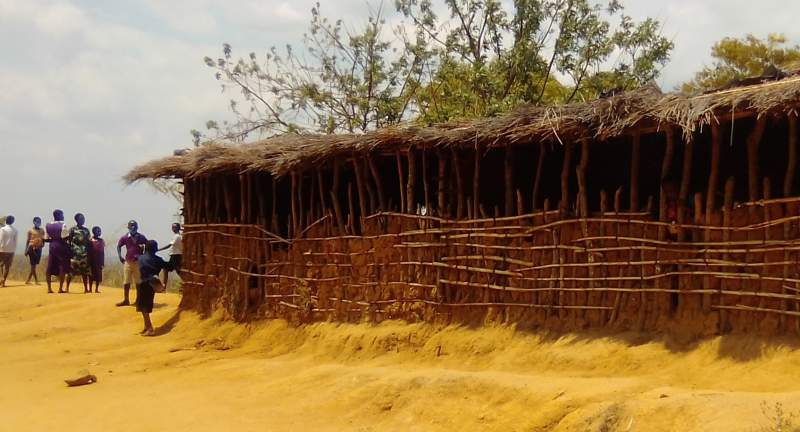 Learners next to their classroom - pic by Steve Kalungwe

Learners of standard three and four at Namapanga primary school in Neno district are likely to have their studies disrupted during this rainy season as their dilapidated grass thatched classroom block is now a death trap.

The school’s head teacher Symon Chipondeponde says government and other well-wishers should swiftly come to their rescue as they have no choice but to send learners home during the rainy season.

"We ask government and other education stakeholders to come to our aid as we are fast approaching the rainy season. This season we are not allowing lessons in this structure", he said.

Chipondeponde says the status of the class room block is posing a threat to education, especially to standard three and four learners who are being accommodated in a dilapidating grass thatched structure which is fast becoming a death trap with the rains setting.

"We have molded over hundred and fifty bricks and mobilized dambo sand with support from mother groups, all we want is support from government and well-wishers to keep these learners in school", he narrated.

A standard seven leaner at the school Patricia Elias is calling on government to consider deploying a female teacher and construct adequate changing rooms for Mwadzi, Thumba and her school, saying they are skipping classes when in menstrual periods as they shy away from male teachers.

"We feel shy to talk to male teachers of our menstrual status and we opt to fake aliments and come back after we are done with our cycle", she shyly said.

Patricia further say, lack of a female teacher is a discouragement to them as they see no role model.

Sub-Traditional Authority Chikalema also disclosed that he has suspended a religious sect in his area which has been stopping its followers from wearing face masks and attending school.

"I have banned them from congregating in my area, some of its followers who are of school going age have even failed to write this ongoing national examinations. Am pleading with stakeholders to further act on this sect", he said.

The district education office is yet to comment on these matters as its officials are reportedly out of the district.