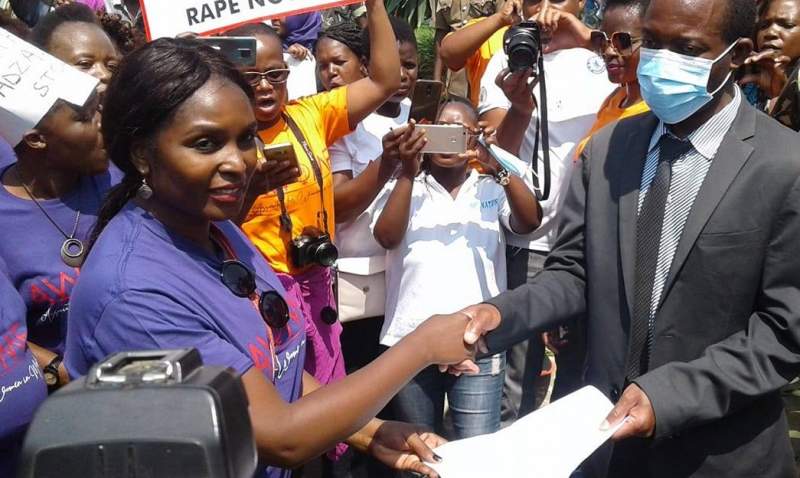 Women journalist under the banner Association of Women in Media (AWOME) have marched in the country’s streets of Blantyre and Lilongwe protesting rampant cases of rape and defilement on women and girls.

In Blantyre, they walked from the Queen Elizabeth Central Hospital to city council offices where they presented a petition, saying they have written enough stories on the subject and the vice has to stop.

“As we go about covering such stories, we have come across heartbreaking stories of what numerous women and girls have gone through at the hands of men who behave as if they have no control over their sexual feelings.

“So many women are living with the trauma of their unfortunate experiences. Women are generally becoming more and more helpless on these issues, even when they are supposed to be protected under both local and international legal instruments,” reads the petition in part.

Reading the petition, one of the leaders, Edith Kambalame, appealed to men that “by raping or defiling them, women and girls are implicitly told they are of lesser value and that their feelings and voices are unimportant. We are humans too.

“Girls below the age of 18 are children, even where their bodies develop quickly. Please treat them as such. They need protection from you as their fathers, brothers, cousins or more importantly, as male adults. An underage girl can never give sexual consent. As an adult male, your role is to protect her.”

To government, the writers called for stiffer punishment on perpetrators of sexual violence should.

“We want stiffer sentences, up to life as prescribed in the penal code. In line with the proposed punishment, that the cases are tried in the High Court. Those who shield sexual offenders must be proactively prosecuted according to the law. There should be centres set up across the country for counselling of victims of sexual assaults,” they said.

Blantyre City Council Director of Health and Social Services, Dr. Emmanuel Kanjunjunju, assured the journalists that the petition will be delivered to the ministry of gender.