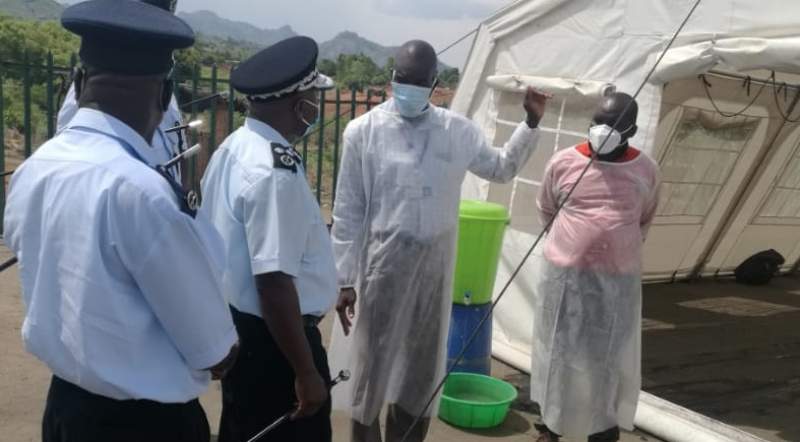 Part of the visit - pic by Pasqually Zulu

Newly appointed Director General of the Department of Immigration and Citizenship Services, Hennings Mlotha, has called on immigration officers to avoid corruption in their line of duty.

He said this on Thursday when he paid his maiden visit to Mwanza border.

Mlotha expressed worry that corruption has tarnished the Department’s image.

"Officers, your routine border operations are not easy. I know how tough it is but I appeal to you all to remain patriotic to mother Malawi and guard this country jealously. Don’t be tempted to corruption because it is evil. Always be professional and you will be rewarded handsomely," said Mlotha.

Officer in Charge for the formation, Mr Eriksson Kanyaza [A.C.I], described the visit as a blessing in disguise.

He said that they have created a good rapport with all key border agencies including Mozambican counterparts at Zobue.

“We have also managed to timely clear self-repatriated Malawian returnees and truck drivers who are bringing in essential services in the country and enhanced border security through ad hoc roadblocks.

“In addition to that, we also have managed to do snap checks and joint patrols with other security departments, sensitization campaigns to the people living along the border on evils of aiding and abetting of undocumented immigrants in the wake of Covid19 global health crisis,” he said.

He, however, bemoaned inadequate houses for the staff, saying they only have 8 staff houses despite having 46 officers.

“Mobility is another setback since the formation has only two vehicles but only one is operational. Inadequate funding is another critical area paralyzing the office day to day operations,” he added.

The Director General assured the officers that he will meet top management to see how best to handle the issues raised.