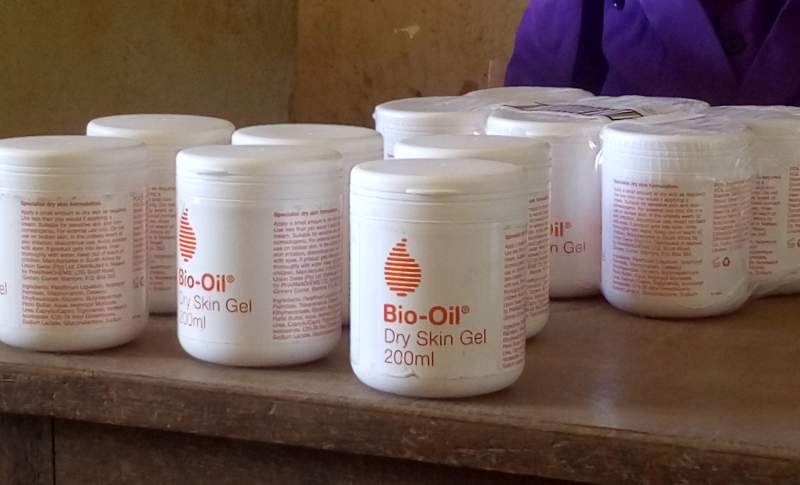 Some of the donated lotion - pic by Hastings Jimani

Network for Youth Development (NfYD) on Friday donated 60 bottles of the lotion to Muloza Health Centre in Mulanje district.

The donation comes amid scarcity of sun screen lotion for persons with albinism in the country’s rural health facilities.

NfYD Programmes Officer, Lidace Nyirenda, said while the “Girls Get Equal” project the organization is implementing in Mulanje is mainly on ending child marriages; the concept is on child protection and among the targeted children are those with various disabilities.

“We are aware of scarcity of sun screen lotion for persons with albinism in the country’s rural health facilities; hence, our support to Muloza Health Centre, one of the remotest health facilities in Mulanje,” said Nyirenda.

The organization also donated 30 boxes of epilepsy drug known as carbamazepine and six boxes of phenobarbitone to the facility.

The hospital’s medical assistant, Chikumbutso Blea, commended NfYD for the support, saying the facility attends to 5 -10 epileptic cases in a day.

“We often run out of stock of these drugs and most of our clients are very poor as you can see and telling them to buy the drugs at private pharmacies, is just a mockery,” said Blea.

Jane Nyengere, a mother of three children with albinism from Ntambalika village in Traditional Authority Njema, was one of the recipients of the lotion.

"I have five children and three of them were born with albinism. I am proud of them all as I know every child is a gift from God," said Nyengere.

Similar donations will be made in Phalombe and Lilongwe districts where NfYD is implementing a similar project.

According to Nyirenda, K3 million has been spent in the drug procurement.

NORAD is bankrolling implementation of the “Girls Get Equal” project through Plan International Malawi.