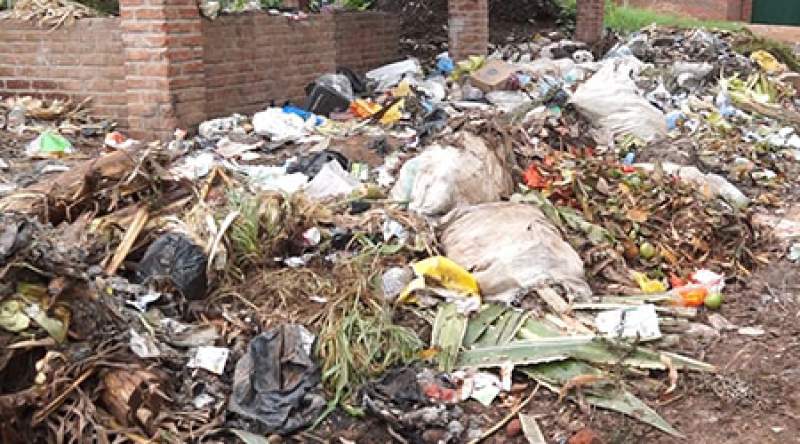 The bone of contention - pic by Enock Phiri

Blantyre City Council (BCC) has come under fire from Namiyango residents in Bangwe for failure to collect refuse from a waste dumping site which is located within their vicinity.

People who spoke to Zodiak Online on Thursday faulted the Council for not heeding their calls to collect refuse from the area, a situation which they say is posing a threat to their lives.

“My concern is that Blantyre City Council is not coming here to collect refuse from this waste pit despite several calls for them to act on it. The stench smell coming from this waste dumping site is unbearable. As you can see there are so many flies here being attracted by the stinky waste,” lamented Mlauzi Nkhoma.

“Our lives as well as those of learners at a private school here are at stake. I understand there was an agreement between the council and a Chinese Company which asked for permission from the city to collect the refuse and turn them into manure but for no apparent reason, the company withdrew from the agreement.

“So, people are still dumping waste here since they were not told to stop,” said Nkhoma.

Another resident, Hawa Mtenje, feared for the lives of children who come to collect waste from the site.

“We are not safe. I fear for children who come to collect refuse here. They are at risk of diarrhea; the city council should act swiftly,” said Hawa.

BCC Spokesperson, Anthony Kasunda, attributed the challenges to lack of vehicles to collect the waste.

“Our waste collection vehicles had mechanical issues hence our failure to collect the refuse. However, let me assure those concerned that we have secured some vehicles which will be used to collect refuse not only in Namiyango but also in other parts of the city,” he said.

There has been a general concern of poor waste management among residents in the Commercial City.