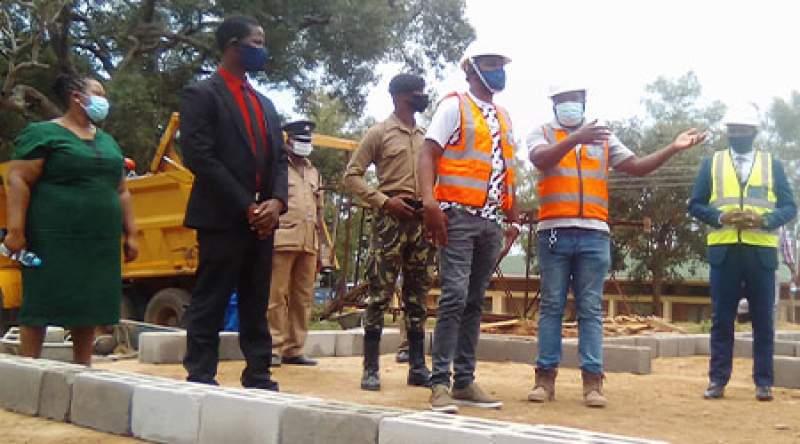 Part of the ministerial visit - pic by Steve Kalungwe

Construction works of Neno Integrated Youth Centre are said to be behind schedule as sports and youth minister Ulemu Msungama says the delay is frustrating efforts of creating jobs for youths.

The minister spoke today Tuesday in Neno when he toured the construction site where he noted that what is being constructed is not what government wanted and has since advised the constructor to work with speed and stick to design.

"This is not the site we wanted the works to be done, it has been shifted but we hope this will not compromise quality because we are thriving to get good quality works," he said.

The minister also had no kind words to Mangalasi construction company which is constructing the Neno Integrated Youth Centre saying it is behind schedule and this has to be sorted out now.

"For this project am not convinced as compared to other projects of a similar nature in other three districts," he narrated.

In response, Lom Gumbo Mangalasi managing partner agreed with the minster on the delay, saying the shift to another place has delayed them with two works and was due to an escom transformer which was on the original site.

"We are in agreement with the minister, we are behind schedule by two weeks but we will catch up. The delay in commencement of this construction project was partially due to an ESCOM transformer which was on the original site and we had to shift", said Gumbo.

Meanwhile the minster also pointed displeasure with another site, Njala, in Karonga.

Once the construction works are over, Neno Integrated Youth Centre will have an ICT center, poultry training centre, tailoring school among others and is being earmarked to benefit the youths of Neno through skills development.