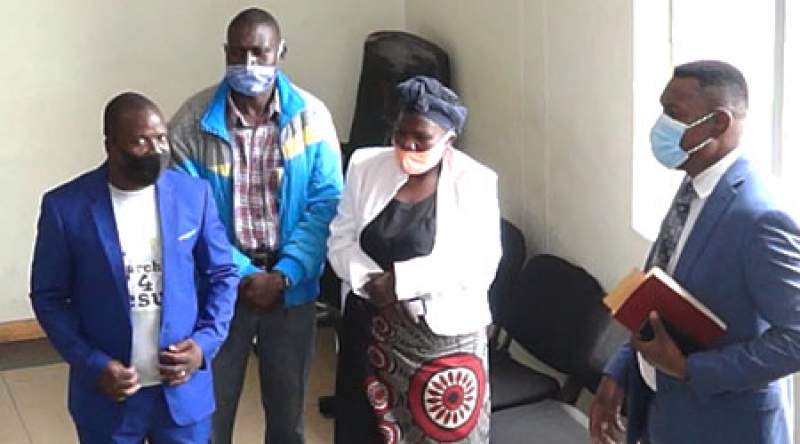 Chisale (holding the Bible) at the court - pic by Enock Phiri

State has applied for revocation of bail for Norman Chisale in an attempted murder case where he is suspected to have shot Sigele Amani in Blantyre last year.

One of state lawyers, Pilirani Masanjala, told the high court in Blantyre yesterday that the body guard of former president, Peter Mutharika, is interfering with witnesses.

Masanjala told the court that “evidence for the application will be provided by the investigator [Soche Police In-Charge of Criminal Investigation Department, Detective Henry Malange].

“We are aware that there is no affidavit to support the application because the facts have just been known today. We therefore request that evidence comes from the investigator himself.”

The investigator proceeded with his evidence where he told the court that one witness, Moses Banda, told him that he had been contacted by the accused person [Chisale].

“He told me that Chisale called and told him not to sign the summon and that he [Chisale] will do anything for him. Banda told me that he was told by Chisale that if he signs the summon, he will be in danger. He said he had been called by the accused person many times,” he said.

In an interview after the proceeding, Masanjala reiterated to the media that “the accused has been in contact with some state witnesses.

“We are lucky that we have come this far but we still fear, because the witness has not yet to testified, they should not be in contact with him. That’s wrong.

“We should be allowed to proceed with the case. If he is defending himself, he should defend himself before the court with evidence and the law on his side but not to interfere with the witnesses of the state; that’s why we made the application,” he said.

From the defense team, counsel Chancy Gondwe asked the court that the state make formal application so that they can also respond to it formally.

He told the media outside the court that “there is no evidence that Mr. Chisale has been interfering with the witnesses. At least we expect evidence.

“The application is laughable, ridiculous embarrassing; as state they should put their house in order; they shouldn’t be malicious,” Gondwe said.

Earlier, Detective Malange told the court in his testimony that police changed the charge from accidental shooting to attempted murder.

He said the charge was amended based on further evidence that was gathered.

“For him [Chisale], the gun was used randomly without proper reason,” he added.

He told the court that it was not easy to arrest the accused person because “Chisale was not a common man to be told that you are under arrest; otherwise, I could not have been here today.”

He said the matters were reported to “authorities” who he vehemently denied to disclose despite being pressed hard by lawyer Chancy Gondwe to reveal who those authorities are.

The witness cited protocols in police as a basis for him denying to disclose identities of those “authorities”.

The lead investigator told the court that the victim, Amani, came to police bleeding as “she was shot on the thigh of right leg.

“We took her to Queen Elizabeth Central Hospital where she was admitted. When I came back to office, I found the accused at the office. He admitted that he was the one who shot Amani. He availed himself on May 20th, 2020,” he told the court.

During the hearing, state exhibited a gun which Chisale is being accused of using to shoot the victim, Amani.

The witness recognized the gun, saying it was the one which he collected from the armory at Sanjika Palace where Chisale surrendered it to be tendered as part of evidence in the case.

“It was found with nine rounds; a Pistol, Jericho type. Two bullets were used from the gun,” he said.

In cross examination, counsel Gondwe asked the witness if he is aware that the accused reported robbery case at the same police, of which the witness admitted.

The witness said Chisale reported that some people wanted to rob him.

The defense also asked for scientific evidence that blood that was found at the crime of scene was indeed that of the victim.

“The victim was with a friend who told me that the blood on the scene was of Amani,” the witness responded.

Detective Malange also refuted that the victim, Amani, came to the police to withdraw the complaint against Chisale.

Defense will from 2 PM today respond to the application.

Earlier in the day, the court visited the crime scene at Chimwankhunda.