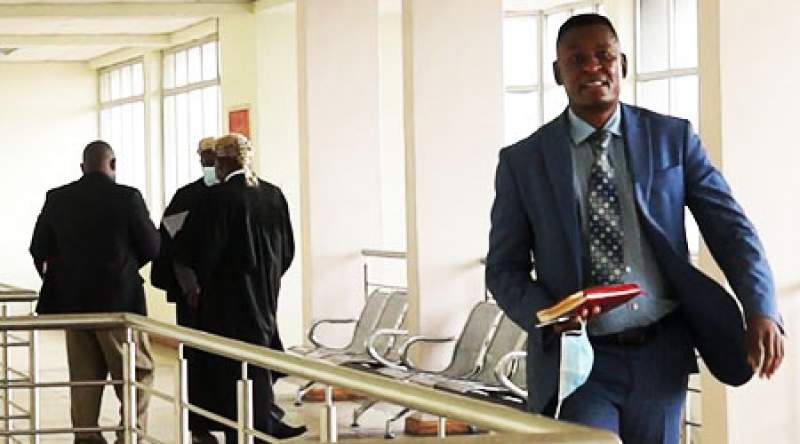 Chisale after the court proceeding - pic by Enock Phiri

State lawyers have submitted call logs to prove that Norman Chisale had been interfering with state witnesses in an attempted murder case which he is answering.

This is in support of an application the state made yesterday for revocation of bail of Chisale on allegation that the bodyguard of former president Peter Mutharika was interfering with witnesses.

One of state lawyers, Pilirani Masanjala, told the court that “it was not possible for the state to make the submission yesterday when making the application.

“Looking at the urgency of the matter, state saw it wise to obtain logs which show that the accused indeed conferred with witnesses,” he said.

“We have filed today the call log of the witness and the accused. For this reason, we will be calling the witness to explain the document and why it is before the court,” Masanjala added.

Masanjala said the witness “will be called at the next date of hearing and that will be the close of the matter by the state.”

In his counter-argument, counsel Chancy Gondwe from the defense team told the court that the application is “embarrassing”.

“They do not want the matter to come to an end. They want to find an exit out of this matter. Maybe they do not have faith in the evidence that they are bringing to the court. May be that could be the reason.

Gondwe, who showed frustration with state, asked state before the court “to be serious” with the matter, calling the application “embarrassing”.

Outside the courtroom, Masanjala told media that “seriousness cannot go beyond the state wanting the accused to stay in custody while we finish the matter.

“We want him to at least be in custody because we are taking what he did very seriously. We have a witness and the witness will give evidence on behalf of state.”

Earlier in court, Counsel Gondwe cross-examined Detective Henry Malange, In-Charge of CID at Soche Police Station, who testified on allegation that the accused was interfering with state witness, Moses Banda.

Judge Sylvester Kalembera has since adjourned the case to Friday morning.