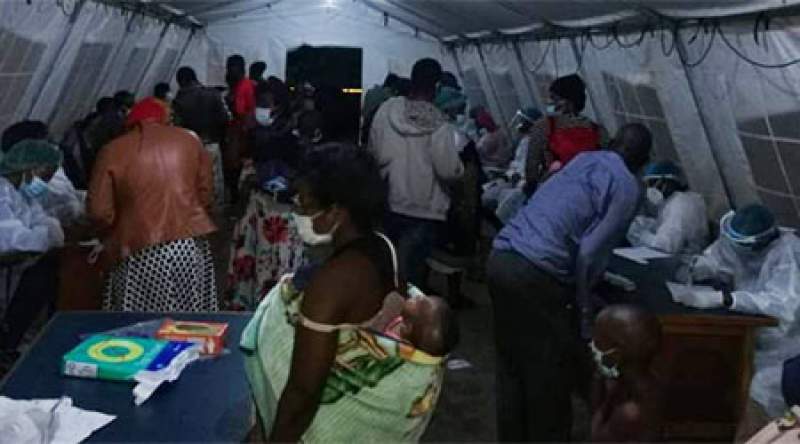 He accuses the pandemic of robbing him and his family three meals he used to have daily; not mentioning other benefits he used to receive from his sons outside Malawi.

His sons; two in South Africa and one in Botswana, used to bring bread and butter on the table.

“My son, Muhamad Bakali, lives in Johannesburg. He used to send us money frequently. At my age, I cannot fend for myself. He used to cover us. We lacked not a thing,” he says.

A Lilongwe-based Ishmael who leads an eleven-member family at Area 23 says “life is now at zero.”

Economic pinch triggered by the pandemic in South Africa is being felt in Ishmael’s house and many other Malawian households who rely on relations in the rainbow nation.

Ishmael says his son, Bakali, and another one who was staying in Cape Town, no longer assist him as they used to before the pandemic.

He says the lockdown in South Africa hit him so bad as his sons were not working.

“As I am speaking to you now, one son from Cape Town is on his way coming back home because survival chances are just minimal in South Africa,” he said.

“Maybe we should just accept the situation as it is and accept to live with the virus among us so that life must move on. We can’t keep on with the restrictions; you know, eating has no holiday,” says Ishmael.

Jacob Makiyi (not real name) lives in the area of Traditional Authority Chowe in Mangochi, another district well known for exporting labor to South Africa.

He is a father of four. He also looks after his sister’s children and grand-children. He is 49 years old.

Makiyi’s livelihood has been relying on his brother and sister who have been in South Africa for three and seven years respectively.

“They have been helping us with food, clothes, fees for the children and other needs. Our farming activities relied on them. There is a lot that we benefitted from them that we cannot mention each one of them. They have been more supportive to us since they went to South Africa,” says Makiyi.

Life, however, made a U-Turn for Makiyi family since the onset of COVID-19.

“We no longer live like before. The help we used to get from the relatives has been reduced drastically. Our relatives have been affected greatly by the pandemic in South Africa.

“During the lockdown, my sister who works for an Asian employer was not working until the restrictions were relaxed.

“Even after the lockdown, my brother is unable to find a job as he was retrenched due to the economic hardships in that country,” he said.

Makiyi now finds it hard to pay for school fees for two children who are in private secondary schools.

“One is in Form 3 and another one in Form 4. Each one needs K45 thousands per term. I am not working. I rely on piece works.

“Any money that I get is channeled straight to food. School fees for these two children is the most hit area I am struggling with,” said Makiyi.

Just like Ishmael, Makiyi feels it is time to accept that COVID-19 is here to stay.

Since April last year, about 20, 000 Malawians have returned home from South Africa fleeing economic hardships orchestrated by the pandemic.

One of the returnees, Noel Kadzem’mawa, told Zodiak Online upon arrival at Mwanza border that “the situation in South Africa is very tough. There are a lot of Malawians there who wish to come back home but they cannot because they do not have money.

“Most of them were retrenched from their workplaces and they cannot afford to pay for food, rentals and other basic needs. Instead, they are just sleeping at the bus depots.”

Dr. Harvey Banda, a lecturer at Mzuzu University, earlier told Zodiak Online that challenges affecting Malawians in South Africa have a negative impact on their relatives back home.

“These people contribute a lot to the country’s economy. If you go to Mzimba, you will find trading centers developed from remittances that these people send,” he said.

A 2018 research on impacts of remittances in Lesotho, Zimbabwe and Malawi by Sarah Truen and friends revealed that “there is certainly evidence that the money in remittance is productively spent, and should not be viewed as contributing solely to potentially inflationary consumption expenditures.

“Remittances play a complex role in poverty alleviation. The ability of desperate people to “vote with their feet” and migrate to seek economic opportunities provides an important safety valve to communities experiencing economic or political shocks, or sustained poverty.”

Mamta Murthi, Vice President for Human Development and Chair of the Migration Steering Group of the World Bank, said that “the impact of COVID-19 is pervasive when viewed through a migration lens as it affects migrants and their families who rely on remittances.”

As the COVID-19 pandemic and economic crisis continues to spread, the amount of money migrant workers send home is projected to decline 14 percent by 2021 compared to the pre COVID-19 levels in 2019, according to the latest estimates published in the World Bank’s Migration and Development Brief.

“The foremost factors driving the decline in remittances include weak economic growth and employment levels in migrant-hosting countries, weak oil prices; and depreciation of the currencies of remittance-source countries against the US dollar,” reads the World Bank report on remittance flows.

Reserve Bank of Malawi Public Relations Officer, Dr. Onellie Nkuna, told Zodiak Online that overall, “inward remittances dropped to US$ 213.1 million in 2020 from US$265.7 million in 2019.

“As you are aware, Malawi reported the first Covid-19 cases on April 2, 2020. However, by that time, the pandemic had already severely hit the global economy, and most countries were experiencing recession.

“This resulted in significant loss of employment and/or cut in wages and salaries of some migrants. Consequently, remittances from these countries (including RSA where about 90 percent of the country’s remittances emanate from) declined.”

Dr. Nkuna, however, added that “with regard to the Month- on- Month trend, the impact was mainly felt from March 2020, where significant reduction in remittances were recorded.

“However, the trend improved from August 2020, largely owing to the easing of Covid-19 restrictions by the South African Government. Further, the increase towards the end of the year, was seasonal, as we were approaching the festive season.”