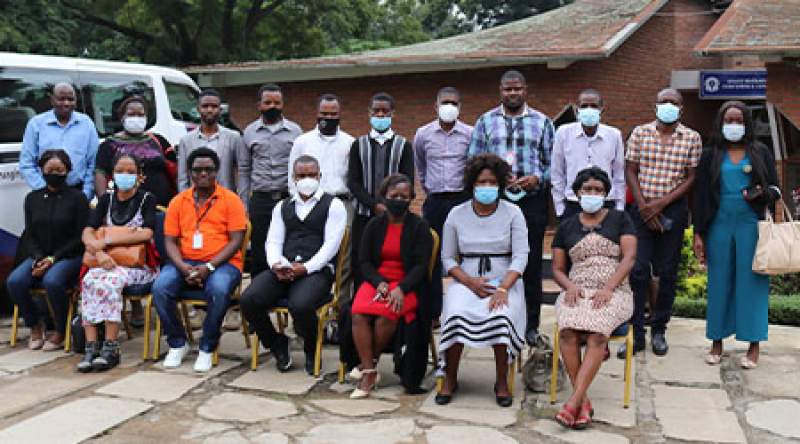 Members of FAST, EGPAF and media during the orientation workshop - pic by Christopher Sande

Two well-known health organizations have asked medical practitioners to scale up management of tuberculosis during this Covid 19 pandemic in order to ensure that citizens, mainly children, are protected.

Program Director for Facilitators of Community Transformation, (FAST), Dr Benjamin Azariah Mosiwa, and spokesperson for Elizabeth Glaser Pediatric Aids Foundation, (EGPAF), Prince Henderson, told Zodiak after media orientation on pediatric TB in Blantyre on Thursday that parents have to take responsibility of taking their children for screening and detection in order to curb TB in country.

“Let communities know that drugs are there that can be used to protect children from developing TB,” said Dr Mosiwa.

He added that in most cases, children that at risk of developing TB, are those under the age of 5 who are in a household where one or two are suffering from TB, and children that have reasons of reduced immunity like those that were born with HIV and malnourished.

“Such children have to be screened and given preventive treatment. We are also sensitizing communities on how they can avoid the adverse effects of TB. Our goal is to end TB in Malawi,” he said.

“Media has a great role to inform the public especially on the need to curb TB transmission among children,” said Henderson.

TB Care and Treatment officer at National TB Control Program, Dr. Kuzani Mbendera, said it is encouraging that TB incidence has reduced in the country with 26 percent of which children are at nine.

“We have increased screening among children, use advanced diagnostic techniques and training of health workers to improve the situation in order to protect children from catching TB,” said Dr Mbendera.

FAST is implementing the Pediatric TB diagnosis and case management in seven district of Blantyre, Mchinji, Dedza, Ntcheu, Mwanza, Blantyre, Chiradzulu and Thyolo with technical and financial support from EGPAF and Unitaid

TB is one of the major killer diseases in Malawi.