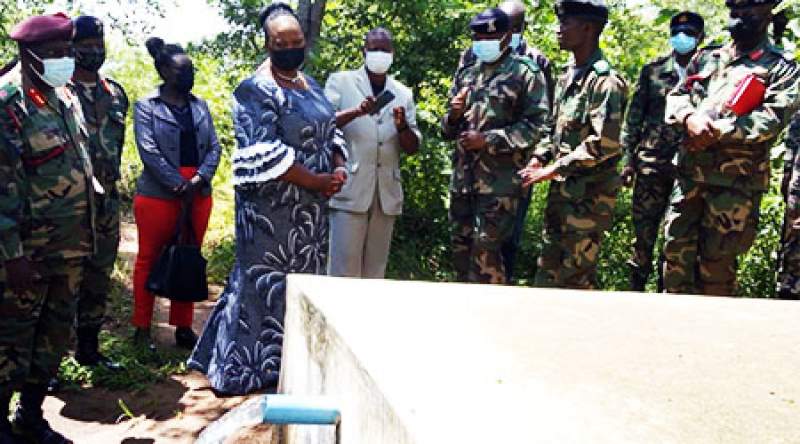 The minister during the visit - pic by Ronnex Chiwanda

Commandant for the Camp, Captain Chikumbutso Mataka, has told Zodiak Online Wednesday that they are using ways which are not sustainable to treat water which is tapped direct from the river, a development he has described as risky to the lives of the soldiers.

He says lack of a treatment plant is forcing soldiers to drink untreated water as they are executing their operations at the camp.

Captain Mataka made the remarks when Deputy Minister of Defence, Jean Sendeza visited the camp.

He has since urged government to find a lasting solution to the problem to protect lives of soldiers from water related infections.

"We are using ways of treating water which are not sustainable such as applying water guard and this is risky to the lives of our soldiers," said Mataka.

In her remarks, Deputy Minister of Defense, Jean Sendeza says the ministry will prioritize the issue of water to ensure that soldiers are drinking potable water.

She however hailed the soldiers at the camp for the good work which they are doing in enhancing security along the border.

The Deputy Minister is visiting MDF units in a bid to appreciate some of the challenges which soldiers are facing when executing their operations.