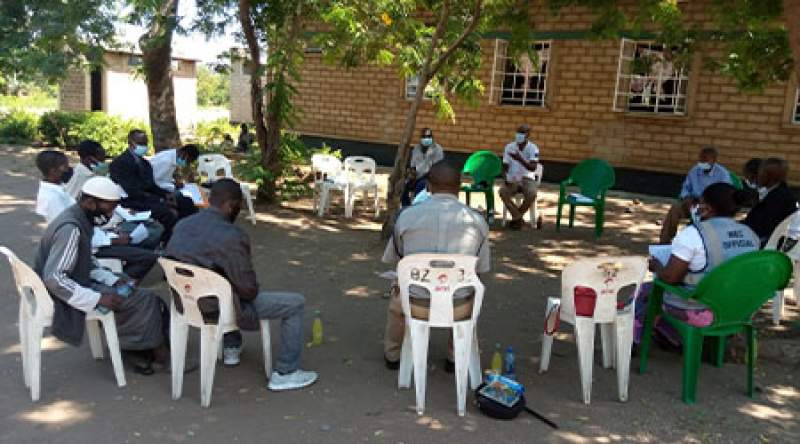 The electoral stakeholders, including National Initiative for Civic Education (NICE) Trust, Police and Malawi Electoral Commission (MEC), say so far, the constituency has enjoyed a peaceful campaign period and hence encouraged the political parties to ensure continuity of the trend.

They made the call during a pre-election engagement meeting organized by the Catholic Commission for Justice and Peace (CCJP Chikwawa), and targeted members of the Multiparty Liaison Committee.

CCJP Project Coordinator, Lewis Msiyadungu, says political parties should, among others, strengthen their monitoring mechanisms to avoid conflicts that arise during polling day.

“We, all (including the political parties), have testified that the electoral process has been peaceful, but it will be of no value if the polling day is plagued by conflict.

“It is therefore important that these players train their monitors and observe standard reporting mechanisms in case they see something fishy,” he said.

Chikwawa Police Station Officer, McDonald Kandulira, has confirmed that the police have so far not recorded any ugly scene in the area during the campaign period.

NICE Trust urged the political players to refrain from making slanderous and mudslinging statements in the remaining two days, adding that the practice is recipe for violence.

The meeting which was patronized by religious leaders and representatives of candidates from UTM, Malawi Congress Party, Democratic Progressive Party, United Deocratic Front and independent was being conducted amid reports of political violence in some other areas, including Nsanje Central Constituency.

But the Political parties in Chikwawa east have spoken with one voice, pledging to maintain peace ahead of the polls and after.

Meanwhile, CCJP Chikwawa has revealed plans to continue monitoring electoral process in the diocese through its Free and Fair Elections; project which is funded by MISEREOR.

“They have identified roving monitors who will also plan to conduct post-election engagements with various stakeholders to ensure peaceful coexistence in the post-election period,” Nsiyadungu said.

The by-elections in Chikwawa East constituency are being conducted after the high court nullified the 2019 parliamentary elections results in the area.