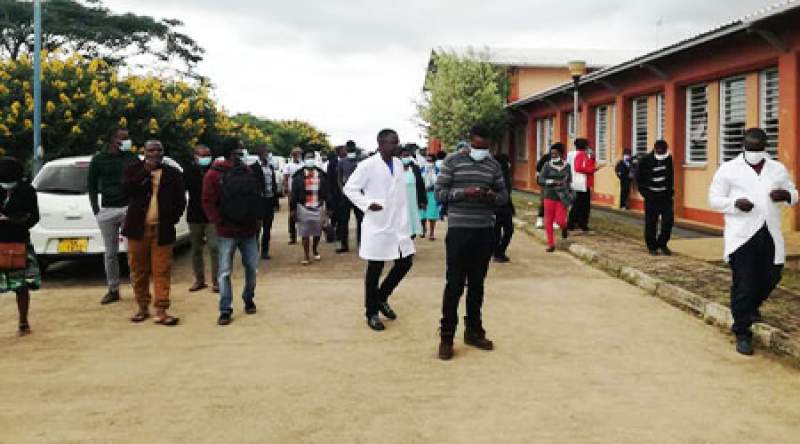 The health workers during the protest - pic by citizen journalist

Patients at Chiradzulu District Hospital were yesterday left unattended to from morning to later in the afternoon because health workers downed their tools.

The workers were protesting what they call poor administration at the facility which they say, among other consequences, led to maternal death of a woman at Namitambo Health Center due to lack of ambulance.

They have since demanded authorities for an explanation on the maternal death.

“We want an update on the recent maternal death (how have you handled the issue?),” they wrote the authorities.

In addition to that, the workers have demanded explanation from the Director of Health Social Services (DHSS) on delayed allowances, locum and other welfare issues.

“What do you prioritize? Do you consult your technical staff? What are the jurisdictions of the Locum committee? Do they have access to final copy of locum payments sheet? If yes, provide evidence,” reads part of the letter the disgruntled workers penned the DHSS.

On Wednesday, the disgruntled workers summoned the DHSS, a meeting which spokesperson for the hospital, Dalitso Gulani, says has resolved all the matters.

Gulani said they have reached the consensus and the workers have resumed their duties.

The workers, however, say they will need response on the issues by Tuesday next week, failing which they will resume boycotting duties.