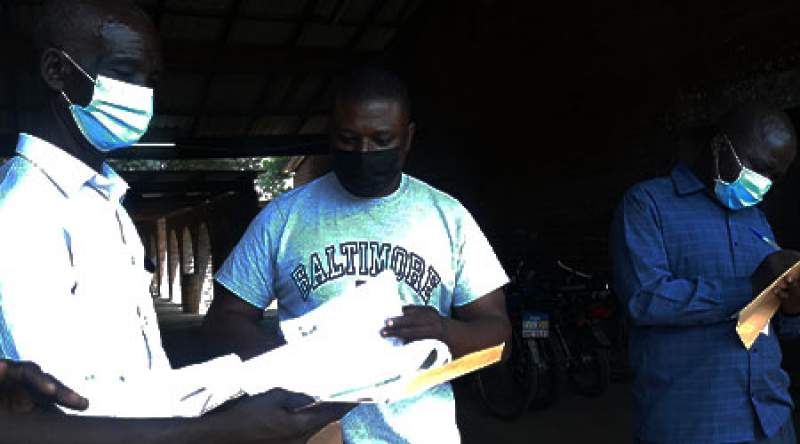 The community representative presenting the petition - pic by Moses Masiye

People of Sub Traditional Authority Matola in northern part of Balaka district have petitioned duty bearers to intervene on challenges they are facing due to climate change.

The people in the petition presented Saturday afternoon to their parliamentarian and ward councilor alongside other local leaders want them to take part in addressing those challenges they cannot manage on their own.

Speaking on behalf of his people after presenting the petition, Sub Traditional Authority Matola said they have on their own taken several initiatives to address some of the challenges.

"Knowing that we have contributed to some of these challenges, we are planting trees in our communities among other interventions at small scale, but we still need assistance as bridges are washed away, roads in bad shape, portable water sources affected and some roofs on institutions blown off just to mention a few.

"This is where we need government and other organizations to come in as we cannot manage on our own," said STA Matola.

He said other organizations like Eagles Relief and Catholic Development Commission (CADECOM) have already stepped in with mechanisms to build resilience, but there is still need for more.

Member of Parliament for Balaka North, Anthony Ngalande, says he will present the challenges to government through parliament and act on some within his reach.

"The concerns are valid and as duty bearers, we will lobby for more support towards building resilience and ensure that some of the challenges are addressed wherever possible.

"We are however, doing our part like providing sources of portable water, constructing and rehabilitating bridges among others," said Ngalande.

He says climate change has indeed affected several sectors and there is a need for concerted efforts.

Aaron Ntaya of CADECOM National Office says they are, in partnership with Eagles Relief, implementing climate Challenge Program Malawi in the area with support from Scottish government through Sciaf and Trocare among other interventions, empowering communities to engage duty bearers wherever necessary.

Ntaya says will keep supporting communities to ensure that they engage their leaders in building resilience and managing some challenges that require special intervention.