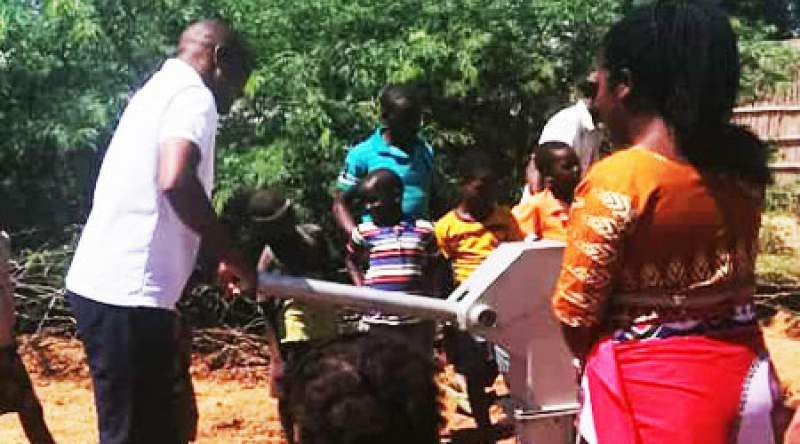 According to Chizuzu, one borehole costs K3 million - pic by Alfred Guta

People who were displaced by floods at Mchacha James in the area of Traditional Authority Mlolo in Nsanje, have taken authorities to task to provide them safe drinking water.

Meanwhile, communities under village headman Nasho can breathe a sigh of relief as they can now access water within reach following the drilling of a borehole in the area.

One of the beneficiaries, Norah Thonje, told Zodiak Online on Friday that access to safe drinking water was a hassle, saying they used to walk long distance to Chambuluka to fetch water.

"We have been struggling to access water. We were walking long distances to fetch water; life was so hard.

"We are grateful to our new legislator, Enock Chizuzu, for fulfilling his campaign promises," said Thonje.

Her sentiments were echoed by Lucia Dobvu also from the area.

Lucia said the situation was putting their lives at stake.

"We were displaced by the 2015 floods at Makhanga. Since then, we have been struggling to access water. Life will not be the same now.

"We can now mould bricks, build houses. Besides, we can also venture into irrigation. The problem was also affecting our livestock," Dobvu said.

She, however, appealed for more support, saying one borehole is not enough.

"Imagine, over 2, 000 people drinking from one borehole? We need at least three boreholes. We have over six villages here,” said Dobvu.

"I made a commitment during campaign to drill five boreholes because access to safe drinking is a challenge here.

"The situation was unhealthy. So far three boreholes are ready now. We will soon finish drilling the remaining two boreholes soon.

"We want to see things improving. We will drill more boreholes in various parts of the constituency," said Chizuzu.

He disclosed that some donors are supporting the initiative through Deputy Minister of Lands, Abida Mia.

According to Chizuzu, one borehole costs K3 million.