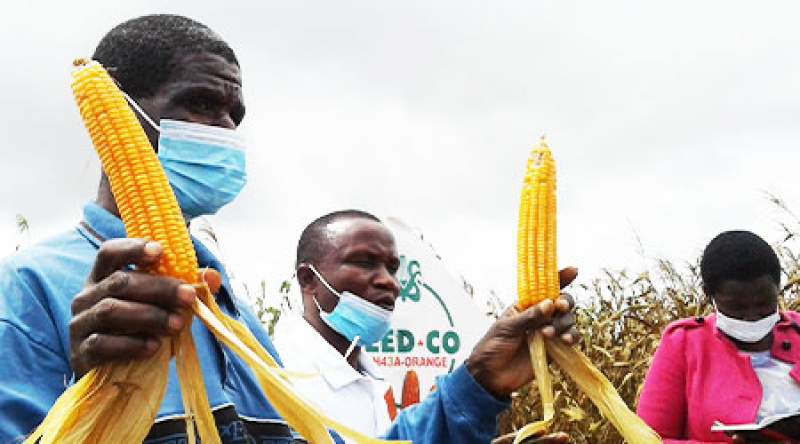 Chindiwo showcasing products of his work - pic by Happy Njalam'mano

James chindiwo heads a family of six. He is a father of four. He lives in the area of Group Village Headman Balakasi in Chiradzulu district.

Feeding his family had never been easy. It was not easy neither to cloth his dependents and provide them with other basic necessities.

“Food is priority. The little money that I get from piece works used to go direct to food. I know school fees for my children is also important but I had to set that aside to prioritize food,” he said.

Chindiwo is a seasoned farmer in his area, but he never reaped enough from his toil.

“No matter how hard I tried to take care of my crops, I never harvested enough to see me through to the next growing season,” he says.

Chindiwo’s problem was that he used to practice ancient kind of farming because his life made a sudden U-turn the moment he migrated to new farming technologies and use of improved seed.

“The same piece of land that I used to harvest four bags, I now realize about forty to fifty bags. The goodness with improved seed is that it suits weather pattern of our area,” he said.

“I have been doing this type of farming for two years now. I am now able to realize enough maize to feed my family and sell the surplus for school fees of my children and other basic necessities,” he said.

Chindiwo’s field was used this year as a model by Seedco Malawi.

“Climate change has come with consequences that are hitting the communities hard. Some time, they could receive more rainfall and other years not.

“When they do not plant improved seed to fit the rainfall pattern, they do not yield anything. We are just encouraging more people to change their mindset and migrate to our improved seed that address climate change consequences,” he said.

Agriculture Extension Development Coordinator, Margret Nkuziona, told Zodiak Online that they are working in collaboration with companies such as Seedco to beat hunger in the area using climate smart agriculture and improved seed.

“We established model fields as an Extension Planning Area and also in collaboration with companies. We do this to encourage people to adopt new farming technologies and use improved seed.

“We are showing the communities that it is possible to harvest more using the technologies amid climate change. Realizing bumper yield begins with good choice of seed. It is from there that they can now go for climate smart agriculture,” she said.