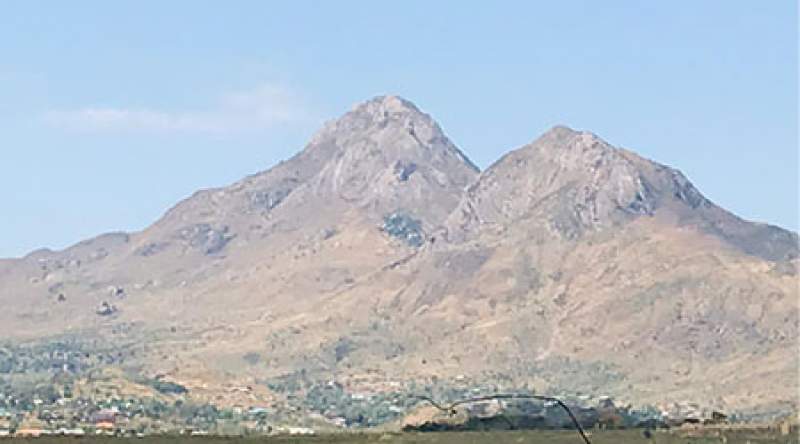 Urban hills are under heavy attack. River reserves are also in dire pressure.

Encroachment of urban hills for construction of informal settlements and farming is now posing far reaching consequences to life in most parts of the country.

Such unprecedented pressure on land is as a result of a number of factors including rapid population, urbanization and failure by citizens to adhere to land laws.

For instance, in Blantyre city, at Ndirande hills, we found Francis Thawatha, a father of three children. He was digging a foundation to construct his house. His initial home made from unbaked bricks collapsed due to heavy rains last year.

The man said he decided to settle in the hill because he could not afford to buy land within Ndirande township.

Thawatha bought his 15 by 20-metre plot at 300, 000 kwacha from a village headman. He stated that the same piece of land in the township would cost him 2 to 3 million kwacha.

“Access to basic amenities here is a nightmare. We fetch water from a well on the top of Ndirande hill. There is no potable water, electricity, or health care services here,” he explained.

Francis stated that he is aware that what they did to settle there was illegal.

“We are not the only ones who have constructed in hills. Look at Soche, Chilomoni and Bangwe where people started constructing houses and farming in hills long time ago,” he explained.

Another resident of Ndirande B13, Mary Sankhani, told us that she decided to settle there after she lost her job. The woman added that she bought her land at 250, 000 kwacha.

When we asked whether she is aware of the risk of disasters on the Hill, she calmly told us that “God protects his people.”

“Climate change is real and I know that this place we are staying is a recipe for disaster. In 2015, Ndirande was heavily affected by floods where a lot of houses were damaged. But we do not have a choice,” said Sankhani.

The once evergreen Ndirande hill is today as bare. Forestry experts say out of 700 hectares of the hill, more than 500 hectares have been encroached by people doing farming and constructing houses.

Wilfred Chikafa a resident at Misesa tells us that he settled there a decade ago. He says the land was bought by his father a long time ago. Here too, there are no basic amenities.

Kanyerere says each rainy season, they plant trees in hills but people uproot them.

The district forestry officer says public service providers should share the blame for providing services such as water and electricity to the illegal settlers.

“Farming activities and construction of informal settlements are almost reaching the top of the hills. Such places are prone to disasters mainly floods. We also blame the electricity company, ESCOM and the water board for providing services to these people,” complained Kanyerere.

In 2015, Blantyre experienced heavy flooding that killed 14 people in the city.

Blantyre City Council Chief Executive Officer, Costly Chanza, has admitted that the Council is facing serious pressure on land in the wake of rapid population growth.

Almost 35% of the total urban land is encroached, he says.

These problems have forced about 65 percent of people within the low-income bracket to encroach fragile areas such as Soche, Ndirande, Bangwe, Mpingwe, Nyambadwe, Mthawira hills and reserves of Mudi, Nasolo, Naperi and Limbe rivers to construct informal settlements.

Chanza says to put a stop to this, the Council has proposed to government to extend the city boundaries and introduce municipal police to enhance enforcement.

Research indicates that in Malawi, deforestation is responsible for the loss of 33, 000 hectares per year, and is mainly attributed to rapid population, agriculture expansion and excessive use of biomass.

Such activities lead to loss of biodiversity and ecosystem services.

It also disturbs natural processes such as biogeochemical, hydrological, and ecological cycles.

Lilongwe University of Agriculture and Natural Resources (LUANAR) Physical Planning Lecturer, Jimmy Gondwe, says construction of houses in hills has to be done by level created by cutting into the slope and not by excavation as is the case in the country’s urban hills.

Gondwe warns that such houses are prone to hydro-meteorological hazards including landslides, run offs, soil erosion and strong winds.

“Such people are in danger of being hit by natural hazards and failure to access basic needs,” says Gondwe.

Environmental activist, Mathews Malata, wants government to stop the lawlessness in urban areas in order to have resilient and sustainable cities in the country.

“We know that there is rapid population but this does not mean people have to go and construct in urban hills. This is illegal. We think this is the right time for government to enforce the laws,” explains Malata.

What is happening in our urban hills and rivers is contrary to efforts aimed at achieving Sustainable Development Goal #15 which demands that countries “protect, restore and promote sustainable use of terrestrial ecosystems, sustainably manage forests, combat desertification, and reverse land degradation.”

The goal acknowledges that Investing in forests and forestry represent an investment in people and their livelihoods, especially the rural poor, youth and women.

Parliamentary chairperson on natural resources, Werani Chilenga, suggests a review of the agriculture and forestry laws in order to bring sanity in cities.

“The challenge is that our policies do not speak to each other. Agriculture policy encourages people to use treadle pumps along rivers yet the forestry laws prohibit this,” said Chilenga.

Lands Minister, Kezzie Msukwa, has admitted his ministry is at pains with developments in the country’s cities particularly Blantyre.

But is the minister ready to enforce the law on such encroachment?

“If people think they could go ahead doing what they are doing, then they would be cheating themselves.

“I will engage my counterpart from the Ministry of Local Government and Rural Development to demolish such informal settlements. They should not say they were not warned," said Msukwa.