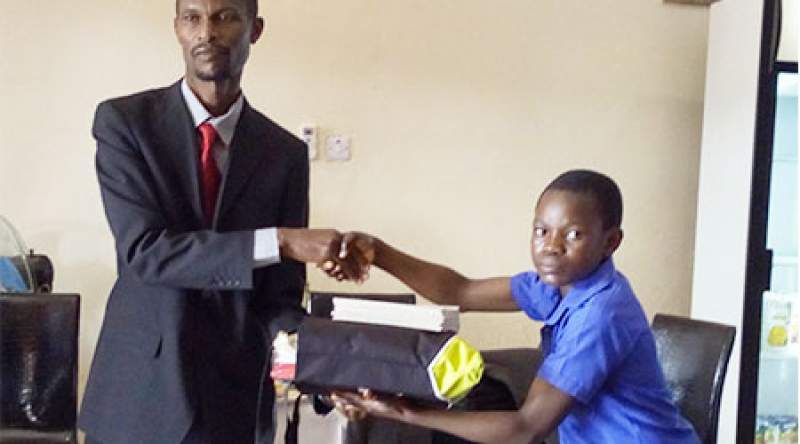 Mutowa receiving his award from Kaphuka - pic by Hastings Jimani

World Vision International (WVI) has awarded five learners from Njema in Mulanje who excelled in the regional bee spelling competition for the south last week.

The competition has been organized by the Ministry of Education in partnership with World Vision International and Zodiak Broadcasting Station and it is for primary school learners in WVI's Area Development Programmes.

As part of motivating the learners, WVI on Thursday organized a luncheon and presented school materials and cloths to the learners.

"We have partners at community and district levels who help in shaping these children and we are happy that some are doing well in class amidst poverty hitting their families," said Semu.

Director of Planning and Development at Mulanje District Council Ernest Kaphuka said it is a pride to have such brilliant children in a district and again coming from the remotest are of Njema.

"In our Social Economic Profile (SEP) which feeds into our District Implementation Plan (DIP), education has been highlighted as among priorities requiring our attention indicating our zeal to promote quality education in the district," said Kaphuka

Kondwani Mutowa who emerged the best among the winning ten said he will work hard to win at national finals slated for July.

"I have no any doubt that I will bring the national trophy to my village in T/A Njema in Mulanje," said Kondwani.

Njema ADP contributed nine learners to the regional finals and four did not make it.