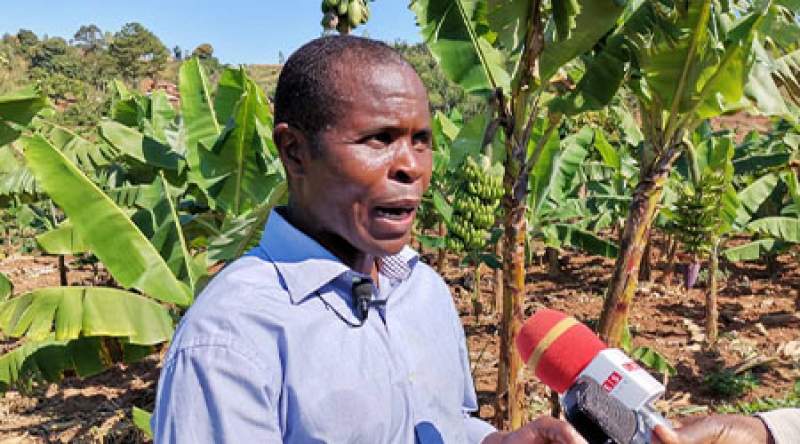 Some banana farmers in Thyolo have suggested that consistent engagement of lead farmers can help to end resistance by many farmers to uproot their infected old bananas and plant new ones.

A farmer, Macdonald Ntokota from Mussa Village under Nsabwe area told Zodiak that such an intervention can help to eliminate the banana bunchy top disease; thereby restoring, the district’s prominence of being the center of banana production in the country.

Ntokota said he received 10 suckers from the ministry of agriculture in 2016 and that now his garden is vast with more than 1000 suckers.

“Apart from harvesting and selling the bananas, I also sell the suckers at K1000 each. I have managed to buy cattle and be in a position to pay school fees for my children. I therefore ask the government to use us as lead farmers to encourage many farmers to plant clean bananas,” said Ntokota.

Meanwhile, Thyolo Director of Agriculture, Environment and Natural Resources, Jackson Nkombezi, says his office in partnership with other partners has intensified village to village efforts to encourage farmers to plant modern varieties.

Nkombezi emphasized that there is a need for joint collaboration to curb the banana bunchy top disease.

“As you may have heard about the history of Thyolo, the district used to have a lot of bananas. We used to produce and supply bananas to different districts and neighboring countries like Mozambique, Zambia and Tanzania. But banana bunchy top wiped out all the bananas,” said Nkombezi.

He was speaking during the scaling up of banana new varieties in the areas of traditional authority Changata and Nsabwe in Thyolo district where people are gradually understanding the importance of modern varieties.

Thyolo experienced the drastic decline of banana production in recent years after the crop was hit by the banana bunchy disease.