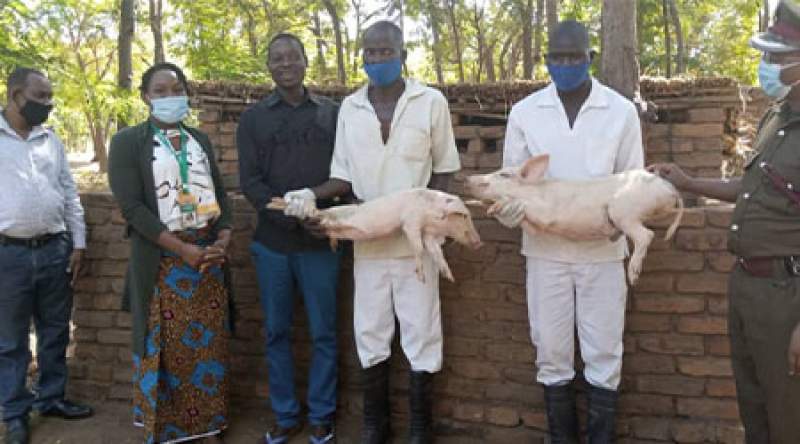 Beneficiaries with their piglets - pic by Alfred Guta

It has been revealed that most of the inmates at Nsanje prison are habitual criminals.

Nsanje Prison Spokesperson Sub Inspector Chifuniro Mukhuna told Zodiak online Monday, this was revealed in a recent survey that was conducted at the prison.

Meanwhile, there are prospects that the trend will be reversed through a project which is empowering inmates economically targeting those that have finished their jail terms.

On Monday, one of the inmates, Kenius Neva 32, from Magulugulu village in the area of Senior Chief Malemia in the district, received two piglets through a resilient building project which was being supported by Concern Worldwide.

"We noted through the survey that the inmates who are at Nsanje are habitual offenders. This was due to lack of economic empowerment. It is in this regard that we approached Concern Worldwide to support the inmates will piggery farming," explained Sub Inspector Mukhuna.

According to the Nsanje prison Spokesperson, in September last year, the organization supported the prison with about 30 pigs which have multiplied to 87 pigs.

"Currently we have 48 piglets. We target to distribute the piglets to 50 percent of our inmates. We believe this will help us to empower them economically so they do not fall into the trap of committing offences," said Sub Inspector Mukhuna.

Neva in an interview assured the authorities that he will not go back to prison.

"I am so grateful. The piglets I have received will improve my economic security, " said Neva.

He told Zodiak Online he was convicted twice for theft but also burglary.

“I stole goats and a laptop and was jailed for 2 years and 7 years respectively. I will never do it again," said Neva.

"The EU funded project started in November, 2017 and it phased out in February this year. We pumped K7.5 million towards reducing food and nutrition security. Besides, we also drilled a borehole at the prison.

"We are impressed to see the fruits of the project. We believe the initiative will make a difference," Said Chimpanzi.