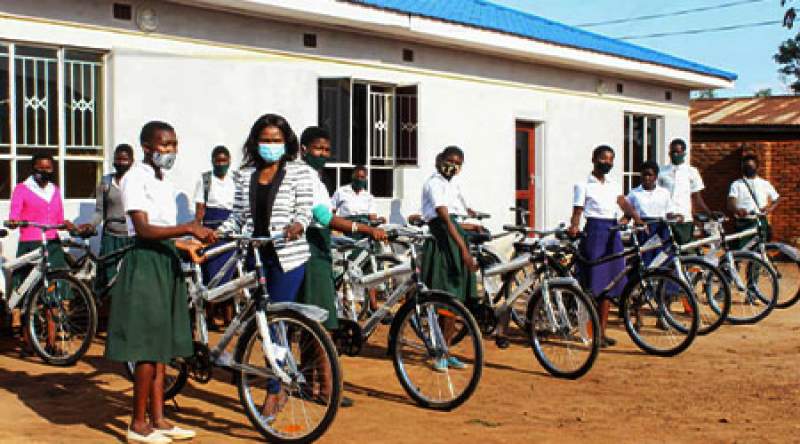 The students have hailed the gesture - pic by Hastings Jimani

A Mulanje based non-governmental organization, Othakarhaka Foundation, has donated pushbikes worth K2 million to 15 vulnerable secondary school students in Mulanje to ease their mobility challenges to schools.

The students are from Chambe, Milonga and Chikonde community day secondary schools.

Speaking to Zodiak Online after presenting the push bikes at Othakarhaka Foundation office at Chambe, the Foundation’s Programmes Director, Ted Limited Mwango, said it was disheartening to see these learners walking long distances between six to ten kilometers to school.

“Walking long distances to school was not easy for these boys and girls and after spending hours in class, they had to cover the same distances back home. For this reason, we decided to buy them these push bikes,” said Mwango.

He said the recipients are also beneficiaries of the organization’s bursary scheme.

Chitani Sanyika from Chole village told Zodiak Online that it was really hard for him to walk a distance of 15 kilometers to and from school.

“Deep down my heart I say thank you Othakarhaka Foundation for this push bike,” said Chitani who is in form three at Chambe CDSS.

A form two student at Chikonde CDSS, Mary Dyton said walking a distance of about 17 kilometers from Phwitiko village where she lives to school was not good for both her health and studies.

According to Mwango, the push bikes have been purchased with support from a US based organization “I Demand Access”.