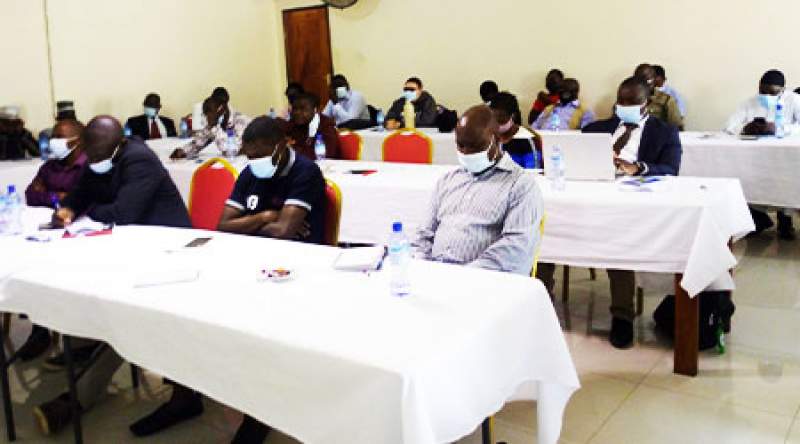 The meeting in progress - pic by Raphael Mlozoa

The Natural Resources Justice Network (NRJN) in Malawi says efforts by the current administration to reform the mining sector will not yield anticipated results unless a serious forensic audit is conducted to stamp out corruption in the sector which is deep-rooted.

Chairperson of the Network, Kossam Muthali, who was speaking in Mangochi Thursday during a mining indaba, organized by Malawi Economic Justice Network (MEJN) said there are few people that continue to reap from the sector which if left neglected the country will not gain anything.

According to Munthali, the way the current administration is outlining its policies shows that it has a very strong stand to make sure there is change on how the mining sector has been conducting its business.

“I am still very stunned if that position will be achieved because we still have very same people, the system is corrupt, at a certain time we even witness that other corrupt individuals been rewarded,” said Muthali.

He said the Mangochi Indaba should be a stocktaking because it has shown that the sector is not moving forward and if stakeholders are to assist the current administration to meet its goals, a soul searching amongst them is a must.

“We have also been asking for a separate account for revenues that come to the sector and issues of enabling environment for transparency,” he said.

He is also suggesting that independent professional valuers who can set prices for gold as for now buyers are the ones setting prices, reaping from small scale miners who are not even aware of prices.

Chief Mining Engineer in the Ministry of Mining, George Maneya, said people should not get worried because as the ministry they are trying to make sure that things are done orderly.

“The ministry of mining is not an obstacle, it is there to ensure that they have investors at large scale and small scale, ensure that the investors have mining licenses and go on the ground to do the operation and engage the local community,” explained Maneya.

Richard Chiputula, director of programs for Malawi Economic Justice Network, said as an organization they are happy with the outcome of the meeting and they will continue engaging stakeholders until people start benefiting from their resources.

“As you have seen from the comments, there are a lot of issues that need to be done by the government, that is not to say there is nothing that has been done, it's only that we need to do more,” said Chiputula.

Apart from the CSOs and government departments and institutions the indaba brought together Chiefs and faith leaders’ representatives.