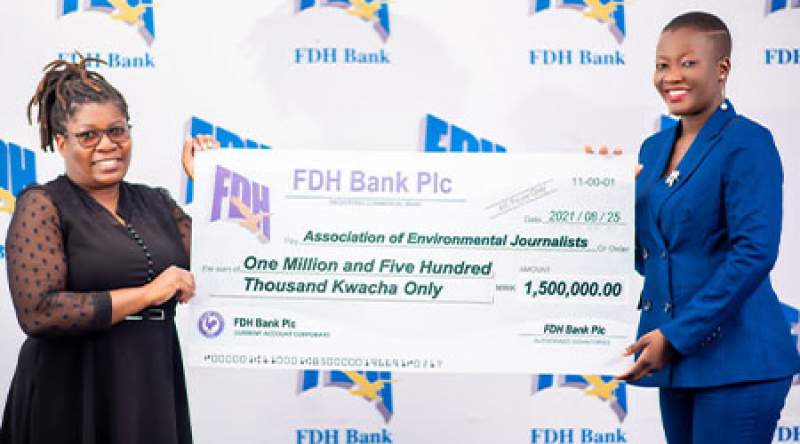 The Association of Environmental Journalists (EAJ) has received a big boost after FDH Bank donated 1.5 million kwacha towards AEJ media awards slated for September this year.

Speaking at a handover ceremony in Blantyre Wednesday, FDH Public Relations Officer Lorraine Chikula said the bank decided to make the donation because it values environmental protection and conservation.

Chikula added that as a bank, they appreciate the role environmental journalism plays in effecting policy change on environment issues.

“We have been noticing the works of the AEJ and we decided to give them support since they are holding their awards in September. We have donated the 1.5 million kwacha towards the AEJ Green Awards.

“As a bank we would like to see the association empowered, for, it is playing a big role as a bridge between the scientists and the people on the ground, to make sure that the environment is protected,” said Chikula.

On her part, AEJ Vice President Wezzie Nyirongo said they hope the sponsorship is the beginning of a lifelong partnership with FDH as they plan to open a media center soon.

“We are grateful for the support that FDH has given us despite the economic challenges institutions are going through due to the Covid - 19 pandemic.

“We hope the support will not stop here. when we knock on your door again, we hope you will respond to our call because as an organization we are planning to open a media center to produce local content and that will need support,” said Nyirongo

FDH will be sponsoring three categories which are the Green Photojournalist of the year award, the Green Accountability award and the Green Documentary award.

The AEJ awards are slated for 19 – 21 September this year.