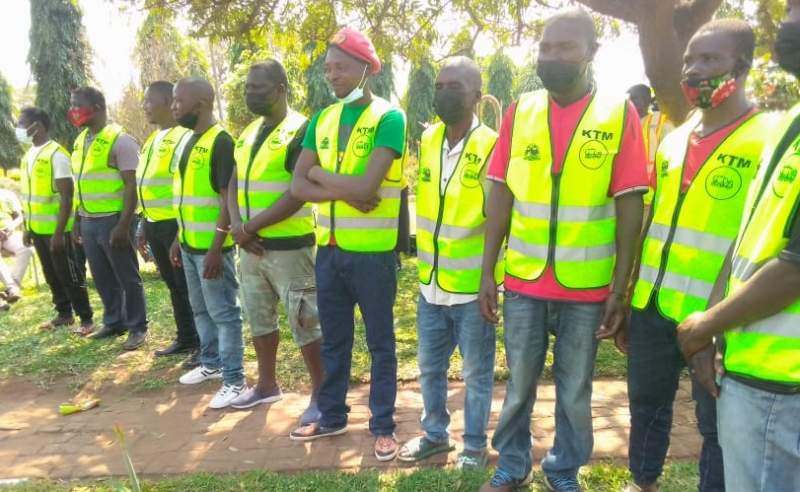 The Chileka Community Policing Forum in Blantyre on Friday received a donation from a Lunzu business man to assist in carrying out their operations in the Lunzu area.

The donation comes exactly two weeks after Chileka Police Station Executive Committee complained about the lack of reflectors limiting them from properly executing their duties.

Mnembo explained that they have been experiencing a number of accidents around Lunzu trading center, saying that is the reason they also decided to train these traffic wardens while giving them the reflectors.

“I would like to thank Mr Phiri for the donation. We also took the time to train the traffic wardens taking them through general etiquette, general hygiene, and cementing their relationships with the police.

“You know when you are on the road you have to be seen by drivers. To be seen it means you have to put on something very reflective. So, these reflectors will assist drivers to identify them easily from afar and avoid putting the wardens in danger,” explained Mnembo.

Phiri said he donated the reflectors to avoid putting the lives in danger of the traffic wardens who assist in controlling traffic in the center.

“Since I am doing business here in Lunzu, I saw it wise to donate these reflectors as a way to assist the traffic wardens who are assisting the traffic police and in turn together, they are working control traffic and avoid road accidents.”

Community Policing Coordinator, Anthony Makunda, said they are appreciative of the donation as the past six months they have been experiencing accidents on the roads and they could not fulfill their duties due to lack of reflectors.

“The last six months we have been experiencing a lot of accidents and as community police we couldn’t do much due to lack of reflectors. Now that we have received this donation, we will be able to discharge our duties and help reduce accidents in our area.”

The Lunzu traffic wardens received 10 reflector jackets which were distributed to the wardens in a training exercise which saw them demonstrating their newly acquired skills and reflectors.

Lunzu police has been experiencing quite a number of accidents as compared to other police stations under Chileka Police in Blantyre for the period of January to June this year.